Mr. Schuester is bringing his love of standards to the world with his second solo album, the upcoming Where It All Began. 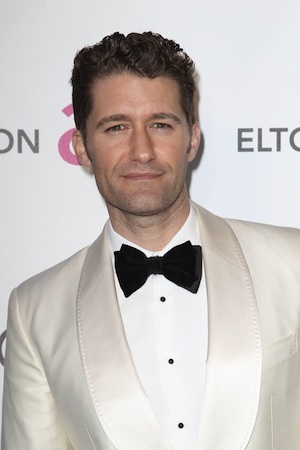 Glee’s Matthew Morrison got his start in theater, most notably as Link Larkin in the in the original cast of the Broadway production of Hairspray. But it’s his role as earnest teacher and New Directions coach Will Schuester in Glee that has the world taking notice of the crooner.

And while he released a pop album two years ago, if you ask me, Morrison is never better on Glee than when he is singing standards. It’s obvious that’s where his heart is.

Where It All Began is certainly a fitting title for Morrison’s second album, a clear labor of love. Most of the songs are from famous Broadway musicals, including West Side Story, My Fair Lady and my personal favorite, Guys and Dolls.

“I enjoyed the journey back to my roots on this new album,” said Morrison in a statement. “This is the album I’ve always wanted to make, and I am looking forward to sharing the experience with everyone.”

The album, which is set to be released June 4, is the first release from 222 Records, the newly formed label from Maroon 5 frontman and The Voice coach Adam Levine.

“I am thrilled to be working with Matthew Morrison,” said Adam Levine. “I am excited for everyone to hear the album because he has so much talent.”

By the way, let it be said that Adam Levine and Matthew Morrison together is a lot of cute in one room.

Calling all Gleeks! Get your Glee recaps and news right here >>

Morrison is also starring in his own special for PBS entitled Matthew Morrison: Where It All Began — Live From the Bushnell, which premiers June 1. In this show, shot in Hartford, Connecticut, Matthew will give viewers the full album experience. Accompanied by an orchestra, backup singers, dancers and band, Morrison will showcase exactly what he does best: perform.

On top of his PBS special, working on Glee and making sure his hair is perfect, Morrison will be performing with the Boston Pops at Symphony Hall in Massachusetts at the end of May and with the National Symphony Orchestra at the Kennedy Center in Washington, D.C., at the end of November.

The first single from the new album will be “It Don’t Mean a Thing,” due out May 1. This year is certainly going to be busy for Mr. Schue.

Glee‘s coming back for at least 2 more seasons >>

I have been listening to some tracks from the record, and these songs do seem to be where it all began for Morrison. All I want to do now is call my friends over and throw a swanky cocktail party. This album is the perfect accompaniment to a martini.

Where It All Began full track listing:

“Singin’ in the Rain” (the actual song, not the mash-up with Rhianna’s “Umbrella” from Glee‘s Season 2)
“Come Rain or Come Shine”/”Basin Street Blues”
“Ease on Down the Road”
“Younger Than Springtime”
“It Don’t Mean a Thing”
“The Lady Is a Tramp”
“As Long as She Needs Me”
“On the Street Where You Live”
“Hey There”
“Luck Be a Lady”
“Send in the Clowns”
“West Side Story Medley”

While we are waiting for the album to come out, we can enjoy Matthew doing his best Fred Astaire on “You’re All the World to Me” with Jayma Mays on Glee.

So what do you think about Matthew Morrison getting back to his Broadway roots? Let us know in the comments below.