If you didn’t get a chance to read The Next Best Thing by Jennifer Weiner when it came out in hardcover (or even if you did!), now you have the opportunity to snap it up in paperback. Just in time for summer, Weiner’s best-selling book is our Red Hot Book of the Week. 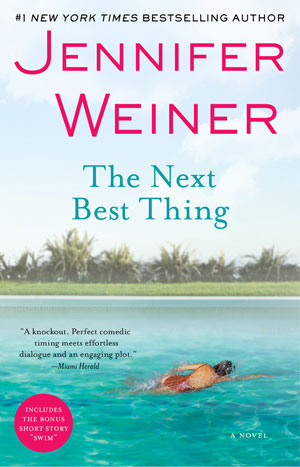 The Next Best Thing

Ruth Saunders, the heroine of The Next Best Thing, was also the subject of Weiner’s 2006 short story “Swim.” Fans find Ruth incredibly inspiring because, although she’s been scarred by an accident, she still has an incredible amount of resolve and heart. Years later, we’re all lucky that Weiner decided to return to Ruth’s life in The Next Best Thing (available in paperback now ) and explore what could happen if Ruth’s dreams came true.

Bonus: In case you haven’t read it, “Swim” is included in the paperback version of The Next Best Thing!

Ruth’s parents were killed in a car accident when she was just 3 years old. Ruth survived the accident, but it left her with permanent facial scars. She and her grandmother have been a family of two ever since. After college, Ruth pursued her dream of writing in Tinseltown, heading west on an adventure with her grandmother in tow, hoping to make it big. After years of failure and surviving a badly broken heart, Ruth finally gets the call: The show she wrote and developed has been given the green light.

As Ruth attempts to create and cast the perfect sitcom, titled The Next Best Thing and based on her adventures with her grandmother, she falls in love with her boss. He, however, is none the wiser. Meanwhile, Ruth’s grandmother starts getting extra work and eventually falls in love herself.

But Ruth quickly finds out that nothing in Hollywood is easy. She encounters every problem from number-crunching network executives who dash her hopes to difficult actors. A fun and moving story about what it’s like for a young woman to survive loss and find love in modern-day Los Angeles, this is a novel you’ll love!

Lounging around with Sarah Pekkanen
RED HOT BOOK OF THE WEEK: The Hope Factory by Lavanya Sankaran
Got a green thumb? Great gardening fiction