The first book of New York Times best-selling author Susan Wiggs’ latest series, The Apple Orchard, explores the real meaning of family and friendship as a young woman is forced to reevaluate everything she thinks she knows about who she really is.

Susan Wiggs is a romance novelist known for her suspenseful series. Her last series was the hugely popular Lakeshore Chronicles. And she will continue to delight readers with The Apple Orchard, the book that begins her next series.

Find out what Susan told us about her LakeShore Chronicles series >> 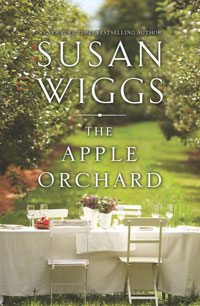 The Apple Orchard is the story of 29-year-old Tess Delaney, who has made a career out of doing what she loves most in this world — tracking down stolen art and treasures and returning them to their rightful owners. But if you ask Tess about her own story, she can’t answer many of your questions. Her own history includes a dad she’s never met and a mom who spent most of Tess’ childhood traveling. And now her mom is her only living relative — or so she thinks.

Tess is riding high on a recent promotion she received after discovering a valuable treasure worth $800,000. So she’s sideswiped when a handsome banker, Dominic Rossi, delivers the news that the grandfather she never knew is in a coma. If he dies, Tess will inherit half of a hundred-acre apple orchard in Sonoma County, California. The owner of the other half? Isabel Johansen, a half sister Tess had no clue existed.The shock of these discoveries triggers an anxiety attack, and Tess ends up in the hospital. Dominic convinces her she needs some time off, and the orchard just might be the place to go.

As Tess meets her sister and other members of this close-knit community, she comes to savor the seemingly simple pleasures this idyllic place can offer. It’s hard, too, not to fall for Dominic Rossi, who is as compelling as he is gorgeous. But just when things seem to be going well, Tess and Isabel learn that the orchard is on the verge of foreclosure and only a miracle will save it. As the newly reunited sisters go on a search through their grandfather’s files, they begin to uncover more long-concealed secrets about their family. But as Tess knows all too well, sometimes things are better left buried.

You’ll love this novel about the strong bonds of family, and that’s why it’s our pick for Red Hot Book of the Week.

De-stress and unwind with these relaxing reads
National Humor Month: A roundup of LOL books
Got a green thumb? More gardening fiction