Alexander Skarsgard is a long way from the vampire-filled town of Bon Temps. 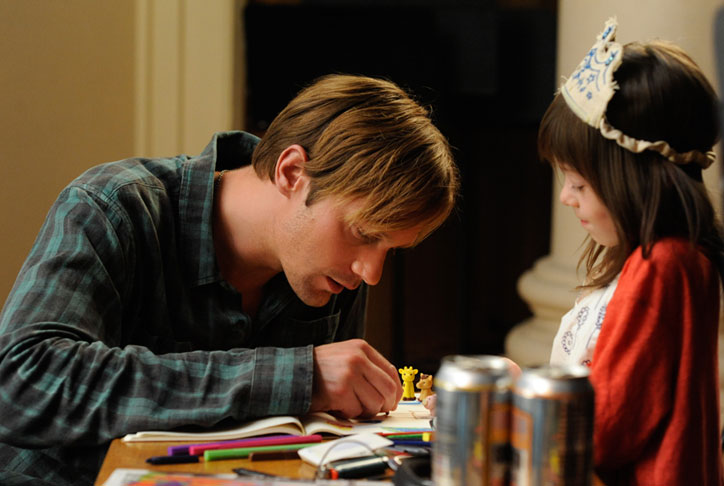 The forthcoming family drama What Maisie Knew is bound to cause audiences to shed a few tears.

The film offers a contemporary retelling of the 1897 Henry James novel of the same name and centers on a child named Maisie (Onata Aprile), who is embroiled in her parents’ bitter custody battle.

Her rocker mother (Julianne Moore) and art dealer father (Steve Coogan) are so wrapped up in their own lives that they fail to see the damage they’re doing to their daughter. While her father carries on a romance with the family’s former nanny (Joanna Vanderham), her mother begins seeing a much younger bartender (Alexander Skarsgard).

Alexander Skarsgard on losing virginity: “Best 8 seconds of my life” >>

SheKnows has obtained an exclusive clip from the film that features Vanderham and Skarsgard caring for the neglected and ill Maisie.


Based on the clip and the indisputably emotional trailer, it’s clear that Skarsgard’s role couldn’t be further from the clothing shy thousand-year-old vampire he portrays on True Blood.

In recent years, the Swedish hunk has seemingly gravitated toward both big budget action flicks, like Battleship, and smaller art projects like Melancholia.

The actor can currently be seen in Disconnect, alongside Jason Bateman and Paula Patton and is slated to appear in the action drama The East and the horror flick Hidden.

Of course, audiences can also catch him on the small screen when True Blood Season 6 premieres on June 16.

Directed by Scott McGehee and David Siegel, the drama is set to hit theaters on May 3.