Ben Affleck is about to add doctor to his impressive list of accomplishments! Weeks after taking home his second Oscar, word breaks the guy who once bombed in Gigli is being given an honorary degree. 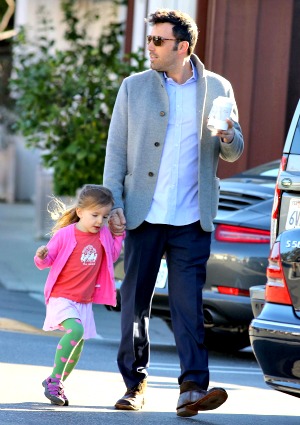 Though he’s simply known as “Dad” to three of Hollywood’s cutest tots, Ben Affleck will soon officially have a doctorate degree under his belt. Brown University has announced they plan to give the multi-talented man a doctor of fine arts degree!

The actor/writer/director, seen here with daughter Seraphina in Los Angeles in early March, is one of six from various fields set to receive honorary degrees.

Oscar winner Ben Affleck is happy “hanging out” with his wife >>

Curiously, the education section Ben Affleck’s résumé is lacking other degrees. The Oscar winner, who recently took home a statue for his Argo work, previously attended both Occidental College in Los Angeles and the University of Vermont — but did not graduate from either school.

From high school diploma to doctorate is a big jump for the Boston-loving star, who was ripped on for film bombs such as Gigli not all that long ago.

Speaking of the backlash against him from a decade ago, Ben Affleck told GQ previously that it became just plain popular to hate on him. He explained the phenomenon by saying:

“Unfortunately there’s an aspect of that that’s like one of those fights you see on YouTube where one of them falls down and then a bunch of people who were standing around come over and kick the person. They don’t know them, they have no involvement in the fight, but they recognize a moment that they can get a free shot in, and for some people it’s just too much to resist. And that was definitely me at that point. I was the guy. I was the designated person to loathe.”

Luckily the tides have since turned, and it seems all is once again in Ben Affleck’s favor!

Do you think we ought to refer to the actor as Dr. Ben Affleck now?