A minor scuffle sends a man with a camera to the hospital, and he calls the cops. 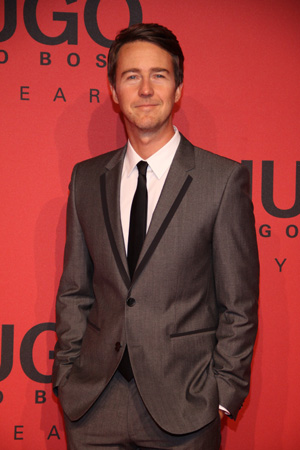 First rule of Fight Club: Stay out of Edward Norton’s face with your camera. That’s what an amateur paparazzo learned this week when he popped up on NYC’s 57th Street and bothered the Fight Club actor.

Frankly, it sounds like Norton was just responding to a bonehead. As the New York Post reports, Norton was walking down the street minding his own business when Alain Becerra-Calderon starting sticking his camera phone in the actor’s face.

Edward Norton has a son >>

“I got a quick question: ‘People say you look like me. Is that true?'” the Post reports him asking, while brandishing the camera.

“Why are you stalking me?” snapped the hapless Norton.

He finally shoved the phone and photographer away and kept walking.

The Post says Becerra-Calderon then “scurried” to Beth Israel Hospital where he was diagnosed with a tissue contusion. For the layperson, this means a little bitty mark on his finger. His middle finger, to be exact. Seems apt, somehow.

The NYPD is reportedly also investigating Norton for “harassment.”

The Post talked to the sore-fingered snapper, who said his encounter with Norton was “very, very scary” and that Norton “needs to learn to control his temper… I asked if I could ask a question, and he grabbed my phone.”

His finger is allegedly “bruised” and “the hospital even had to put a bandage on it.”

Becerra-Calderon said he is discussing the possibility of legal action with his attorney.