Too bad they don’t have the monkey anymore. They could blame it for the drugs. 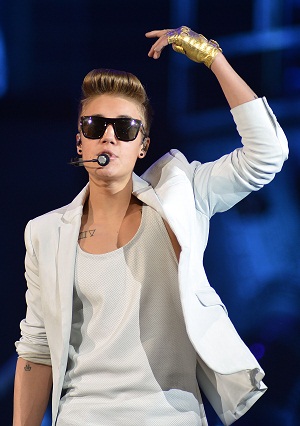 According to the Associated Press, Swedish police raided Justin Bieber’s tour bus on Wednesday night after noticing a suspicious odor coming from the vehicle. Once on board, they found a small amount of drugs.

This would certainly explain Bieber’s recent erratic behavior. However, Bieber was not on the bus at the time of the raid. The 19-year-old pop star had left and was headed to the arena just a half hour before police mounted his tour bus.

Bieber wasn’t present, but several others were on the bus during the time of the raid. A source told People magazine that “no one was cited or arrested.”

As for the drugs found: They’re believed to be marijuana, but Stockholm police aren’t willing to divulge that information at this time. They have sent the drugs to a laboratory for testing.

The police spokesman, Lars Bystrom, told AP that in addition to the drugs, police also found a stun gun. We’ve yet to hear reports of stun guns being used to control rabid teenage fans. Our minds our running wild with possibilities.

As for the weed, unless there’s some sort of fingerprint evidence, police will no doubt have a hard time linking the illegal substance to the pop star. It could belong to any one of the people in Bieber’s entourage.

In the past couple of months, though, fans and the press have witnessed Justin’s behavior grow increasingly more violent and worrisome. That hardly seems like a side effect of smoking pot, but many are still worried about the young performer.

Aside from drugs, Bieber also had his monkey confiscated >>

We don’t want to judge anyone. However, we do hope this information filters back to the parents of Bieber’s screaming fans. Now would be a great time for an updated talk about drugs. We also hope this incident encourages Bieber’s handlers to get a better hold on their star.

As for Justin’s comments? On Thursday morning he tweeted, “Some of the rumors about me…. where do people even get this stuff. whatever…back to the music.”

Biebs, dear, it’s not a “rumor” if the police have issued a statement to the Associated Press.