Barbra Streisand is well known for being demanding and hard to please. If you invite her to your presentation, be prepared to rearrange the furniture. 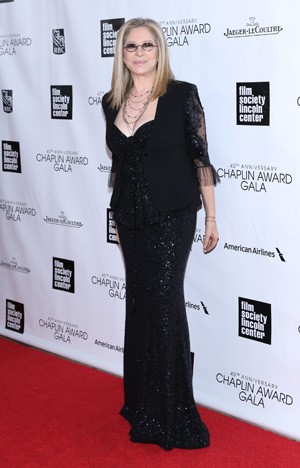 So where does Barbra Streisand sit? Anywhere she wants to.

The singing superstar was honored Monday night with the Film Society of Lincoln Center’s Charlie Chaplin Award for lifetime achievement.

The award is accompanied by a gala and show at which the honoree generally sits on a balcony box on the left side of the stage, the New York Post notes. Streisand, however, sat on the right.

Why? She only wanted audience members to see her “good side,” the left side of her face.

When the Post asked her representative about the switch, he replied, “It was a truly glorious evening. There are stars, and there are a few superstars. And then there’s Barbra.”

A rep for the Film Society called the switch a “production decision” to make it easier for the VIPs at the ceremony to get to the stage, the Post says.

And what VIPs! Liza Minnelli! Pierce Brosnan! Amy Irving, who called her scenes in Yentl with Streisand “the best girl-on-girl action” she ever had, according to Entertainment Weekly.

Perhaps most marquee-worthy of all was former U.S. President Bill Clinton, who said in his speech that, “When I was president, we had a small list of members of Congress that we called the ‘Just Say Yes’ list because they were so dogged that you knew you were going to give in to them sooner or later, and it saved a lot of time to just say yes. That’s the way dealing with Barbra is.”

Ben Stiller also attended the gala and made a tribute speech in which he told the crowd he pretended to be a Funny Girl fanboy to butter Streisand up enough to appear as his mom in 2004’s Meet the Fockers.

Blythe Danner, mom of Gwyneth Paltrow, had some things to say about the birthday parties Streisand throws for her dog, Sammie. Whew, would you not pay big to be a fly on the wall at those parties? Do you suppose Sammie has to have an ivory birthday cake?