Heartbroken now that the season finale of the hit show The Following is airing? We’ve got some book picks for fans of the show to tide you over until the next season.

The Following, the hit television show on Fox, wraps up its first season tonight. Starring Kevin Bacon as former FBI agent Ryan Hardy, the show focuses on a serial killer named Joe Carroll and his cult of followers. Carroll was a professor who taught the works of Edgar Allan Poe — and murdered in the author’s honor as well. Now that he’s escaped from prison, it’s up to Ryan to stop him once and for all. 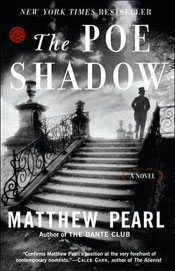 The Following focuses on the followers of Edgar Allan Poe, but what about the man himself? Celebrated historical fiction author Matthew Pearl explores that in his novel The Poe Shadow. It’s Baltimore in 1849, and Edgar Allan Poe has just died. One of his followers, a lawyer named Quentin Clark, believes that there was more to Poe’s death than meets the eye, and he is determined to discover what really happened to the beloved author.

The Devil in the White City: Murder, Magic, and Madness
at the Fair That Changed America 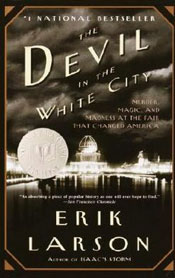 If it’s the ways of serial killers that fascinate you, none has chronicled it better than Erik Larson in his book about H.H. Holmes. Larson juxtaposes the story of the Chicago World’s Fair of 1893 against the tale of Holmes, a serial killer who used the fair to reel in his victims. The book is non-fiction, but it’s so engaging with such a strange and unusual storyline that you’ll swear that the tale came straight out of the author’s mind.

In a Strange City 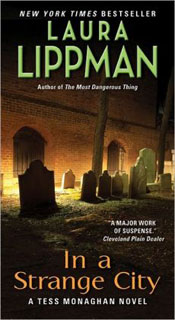 Laura Lippman’s series of Tess Monaghan novels are beloved by many readers, and one of them focuses on the legacy Edgar Allan Poe left behind.

Each year, on Poe’s birthday, a mysterious cloaked figure appears at Poe’s grave in Baltimore and leaves three roses behind. This is a tradition that has gone on since the author’s death, and though no one knows the identity of the cloaked man, it’s a ritual that Baltimoreans cherish. So when someone arrives in private investigator Tess Monaghan’s office demanding that she uncover the identity of this secret man, she knows she’s in for a difficult case.