Armie Hammer is beefing up his resume with another TV classic. The actor’s going from The Lone Ranger to The Man from U.N.C.L.E. 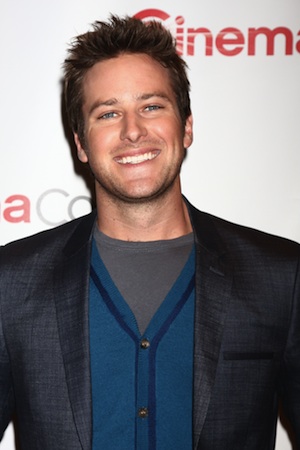 Armie Hammer has landed another high-profile gig. The actor’s signed on to star in the big screen adaptation of The Man From U.N.C.L.E. If the title sounds familiar, it’s because it’s based on the TV series from the 1960s.

According to Deadline, Hammer will join fellow leading man Tom Cruise as Napoleon Solo and Illya Kuryakin. On the show, the characters were played by Robert Vaughan and David McCallum.

They were “two agents of the United Network Command for Law Enforcement. With gadgets and their wits and charm, they fought the evil forces of T.H.R.U.S.H. (Technological Hierarchy for the Removal of Undesirables and the Subjugation of Humanity).”

The film’s been in development for years and has lost and gained talent. At first, Warner Bros. was set to produce with Steven Soderbergh directing and George Clooney as the star. Unfortunately, Clooney had to back out because of health issues, which minimized his ability to perform.

George Clooney backs out of The Man From U.N.C.L.E. >>

Shortly after, Soderbergh dropped out, leaving The Man From U.N.C.L.E. in limbo. At some point, the studio tapped Guy Ritchie (Sherlock Holmes) to direct and got Cruise to take over for Clooney. Now with Cruise as Solo and Hammer as Kuryakin, U.N.C.L.E. has its dynamic duo.

This summer, Hammer partners up with another superstar, Johnny Depp. The actor plays the title character in The Lone Ranger, with Depp as his sidekick Tonto. The film opens in theaters July 3.