Get ready for a hammer-slinging thrill ride! 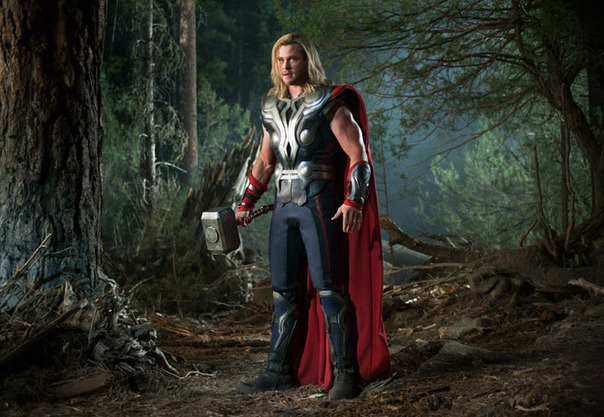 Chris Hemsworth is reprising his role as the dazzlingly buff comic book hero Thor in the forthcoming Thor: The Dark World.

The film, which made the Australian hunk famous, serves as a follow-up to Thor, released in 2011 and The Avengers, which made its debut in 2012.

Now a new trailer for the highly anticipated action film has arrived and it has everything we could have asked for. There are jarring fight sequences, epic explosions and, of course, romance.

The promo begins with a voice-over narration from Sir Anthony Hopkins that establishes the film’s more serious tone.

Lately, it seems that the promos for superhero flicks, such as Iron Man 3 and Man of Steel, have played up the dramatic elements of the storyline.

Thor: The Dark World synopsis reveals the cosmos in crisis >>

In the film, which is slated to be released on Nov. 8, Thor has returned to earth and reunites with Jane Foster (Natalie Portman). Despite the substantial height difference between the two, their chemistry is palpable and we couldn’t resist their adorable banter in the first installment.

Set following the events chronicled in The Avengers, the latest installment centers on the god of thunder’s fight to prevent the world from plunging into a state of darkness. In order to do so, he must defeat an ancient race of Dark Elves led by Malekith (Christopher Eccleston).

Ironically, Thor is forced to seek aid from his villainous brother Loki (Tom Hiddleston), who was previously his enemy. From the trailer, it appears that Loki is keen to join forces with his nemesis and we couldn’t be more excited about that!

Directed by Alan Taylor, who has helmed episodes of hit shows like Game of Thrones and Boardwalk Empire, the film also stars Kat Dennings, Stellan Skarsgard and Chris O’Dowd.

With the tremendous success of Thor and the smash hit The Avengers, there’s little doubt that Thor: The Dark World will lure audiences to the theaters.