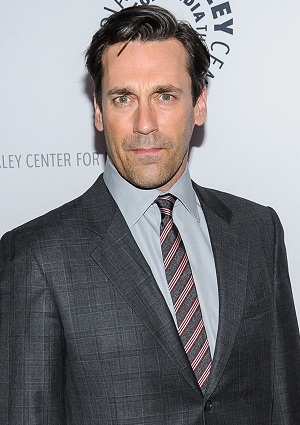 Even if you don’t clamber to the couch for every football game or support your less-than-perfect local sports team (*cough-Cubbies-cough*), that doesn’t mean you can’t watch ESPN’s ESPY Awards. But, why should you? Easy. Mad Men‘s ultra-cool Don Draper-playin’ Jon Hamm will be there to host the event.

Added bonus: All the other hot jocks in the audience. Seriously. It’s man candy central.

If the Hamm and ESPYs pairing seems weird, we promise it’s not. The studly actor has referred to himself as a “marginally successful high school athlete.” Hamm was actually a linebacker on his high school football team and apparently turned down Ivy League football scholarships to go to the University of Texas instead. In ESPN’s official announcement, they also said he’s a St. Louis Cardinals super fan.

The relations don’t stop there, though. Hamm is also the star of an upcoming baseball drama, Million Dollar Arm. The movie centers on a sports agent who stages a reality show in India in order to find new pitching talent to bring back to the States. In other words: lots of Jon Hamm out of his Mad Men suit.

The ESPY Awards take place at the Nokia Theater in Los Angeles, California, on July 17 and will presumably air that night on ESPN. The Awards honor that year’s star athletes in a number of sports.

According to the Associated Press, Hamm’s biggest concern about hosting the ESPY Awards is figuring out which cleats to wear with his tux. Maybe he’ll do wardrobe changes in the form of cleat changes? Quick! Somebody get this guy a sponsor!