Gretchen Rossi is engaged! Rossi proposed to boyfriend Slade Smiley in a dramatic and over-the-top proposal, but who bought her 4-carat ring? 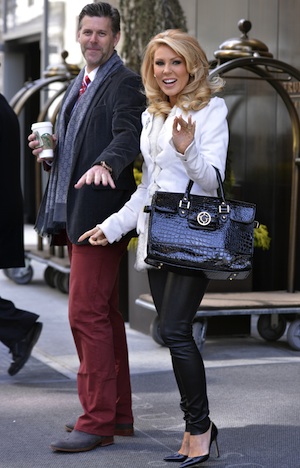 In Touch Weekly broke the story, and a source close to Rossi and Smiley said it was a wonderful evening. “She proposed to him on top of the AT&T building in [Los Angeles],” said the magazine’s source. “She had flown him up there via helicopter for the dramatic proposal.” In Touch Weekly says Rossi’s engagement was filmed and will be televised — we think most likely for an episode on Real Housewives of Orange County.

Slade recently gushed to In Touch Weekly about his then-girlfriend Gretchen. “We have such a fun, outgoing relationship. There isn’t any aspect of Gretchen that I don’t think is absolutely delicious.”

Life & Style nabbed the first official photo of the newly engaged Rossi, which shows off her massive 4-carat yellow diamond ring. The magazine reports Danny Arik for Newport Jewelers designed Rossi’s engagement ring and that Smiley seemed to paid for it himself — despite a middle-class salary and a reported $160,000 in overdue child-support payments. TMZ reports he currently pays $775 per month to Michelle Arroya, mother of his son, Grayson.

Gretchen Rossi was previously engaged to the late Jeff Beitzel in 2008 and was divorced from her first husband, Chris Rossi, in 2007. Slade Smiley has never been married.