Dallas-Fort Worth TV watchers taking in the live coverage of Friday’s manhunt for the suspects in the Boston Marathon bombing got a shock when a familiar name flashed on their screens. So sorry, says the erring captioners. 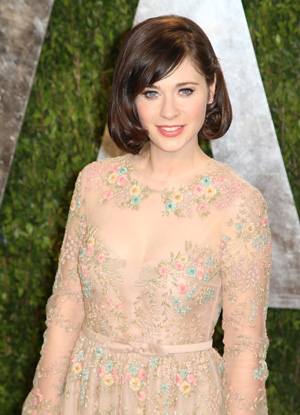 “Marathon Bomber. He is 19-year-old Zooey Deschanel.” That’s the caption that ran in the Dallas-Fort Worth area Friday afternoon during Fox’s live coverage of the hunt for the bombers that tragically hit the Boston Marathon.

Zooey Deschanel nails it at the Golden Globes >>

It’s not clear exactly what went wrong at Caption Solutions, the company that made the mistake. But it doesn’t take a genius to see that it’d be relatively easy to make an error during live coverage, particularly of an emotional event.

It’s fairly common, in fact, to see captioning errors during live news events, or events that are broadcast live, like the Olympics or other sports events.

ESPN ran a story on the closed-captioning errors common in sports coverage in 2009. It noted that “Real-time captioners for the National Captioning Institute can clock 300 words per minute. They average 7,000 words an hour, which is a carpal tunnel-inducing 14,000 keystrokes every 60 minutes.”

Zooey Deschanel hits it out of the park >>

So it shouldn’t surprise us, really, that occasionally mistakes are made.

Caption Solutions says both the company and the erring captioner “deeply regret” the misidentification. Company president Kala J. Patterson said in a statement issued Tuesday that those involved “sincerely apologize for this error.”

Deschanel was apparently tipped off to the mistake over the weekend, tweeting “Whoa! Epic closed captioning FAIL!”