Will Smith isn’t the only member of his famous household who can do whatever he wants. His kids can, too — as long as they are able to explain their choices. 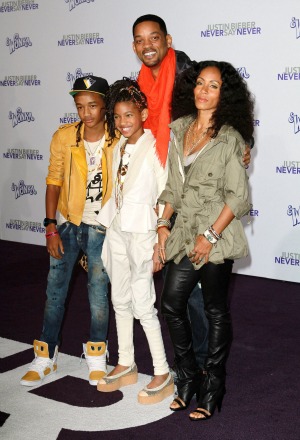 Jada Pinkett Smith lets her husband Will Smith do whatever he wants as long as he can look at himself in the mirror — and that attitude extends toward the couple’s two kids, Willow and Jaden.

In an interview with Metro to promote their new joint project After Earth, Will and Jaden talked about the family’s discipline plan for the kids — or the lack thereof. Basically, there is no punishment in the Smith household!

“We don’t do punishment,” Will explained.

“The way that we deal with our kids is, they are responsible for their lives. Our concept is, as young as possible, give them as much control over their lives as possible and the concept of punishment, our experience has been — it has a little too much of a negative quality.”

“So when they do things — and you know, Jaden, he’s done things — you can do anything you want as long as you can explain to me why that was the right thing to do for your life.”

Sounds like a teen’s dream and a parent’s nightmare. So how’s that working out for them? Pretty good, surprisingly.

Jaden noted “it works pretty well” and said it has so far helped the 14-year-old avoid the pitfalls of growing up in Hollywood.

Get the scoop on all your fave celeb families — subscribe to the SheKnows Entertainment newsletter! >>

“Other teenagers go to parties and sometimes I be like, ‘Why am I here right now?’ And most of the time, I just leave right then and there,” Jaden said. “Some things I don’t like to do, that other teenagers do. Everyone thinks that since you make movies, you go to parties, and I like to party, but not normal teenage parties.”

Regardless, he’s not getting anything past dear ol’ dad. “This is what I’ve realized: No matter what I do or how I do it, he knows 100 percent of what’s going on,” Jaden said.

“There’s no point in hiding anything because he knows. Whether he acts on it or not, he knows. I just know that he knows.”