After reading story after story in which stick-thin celebs claim to be gorging on McDonald’s and ice cream, it’s kind of nice to read that Kelly Osbourne still struggles to stop herself from eating everything in sight. 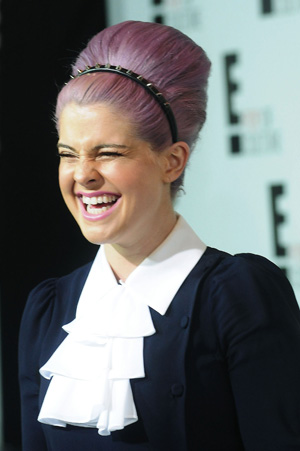 Moderate? With french fries? Sorry, no can do, said Kelly Osbourne, who talked with HuffPost Celebrity about her struggle to keep off the 70 pounds she famously lost in the past few years.

Osbourne, 28, says there’s no magic. She just has to exercise, and push herself away from the table if she wants to be on TV and to model.

“Once I learned how to work out right and eat right, it’s one of those things that you just have to commit to a life change rather than being on a diet. Because a diet doesn’t work. You lose weight and you stop it and it will all come back. So you just have to take baby steps, commit to something and stay true to it,” she explained.

Kelly Osbourne gets back to work after seizure scare >>

Right! That sounds good! But it’s easy to say that, and a lot harder to say no to every single temptation that comes your way every single day.

Osbourne agreed: “Everything has to be in moderation and to find that place is easier said than done. It really is,” she said. “Everyone’s like, ‘Oh it’s all about moderation!’ I’m like, well what are you going to do with a plate of french fries in front of you, moderate? No. You’re going to eat every single one of them!”

And as any dieter has learned, exercising is a fairly futile way to lose weight. The calories in just one small McD’s order of french fries takes an hour to walk off. How many hours you going to walk a day after eating just one fast food meal? And did you supersize it? Forget it. You’ll be out running all night to get that off.

Osbourne admitted that she often gives in to her cravings. “I always cheat,” she said, laughing and adding that pizza was her downfall. But she tries to manage it by eating her most caloric meals, like pizza, in the morning when there’s still a chance to work off the calories during daily activities: “If I’m craving pizza, I’ll have it for breakfast, salad for lunch, and oatmeal for dinner.”