We need very little excuse to drop what we are doing, stoke up the tune “Dream Weaver,” and engage in a little hunk appreciation. So, thank you Marvel Entertainment and Marvel Studios, for releasing the trailer for Thor: The Dark World. We may have to wait for November for the actual movie, but we don’t have to wait to have a Chris Hemsworth fest… 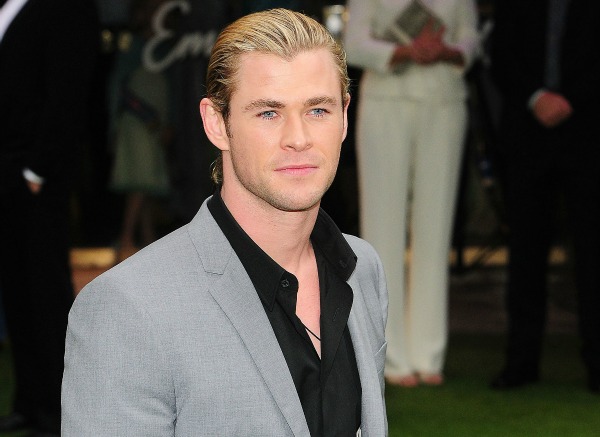 The “land down under” is known for producing magnificent males, and we can now add Chris Hemsworth (and his equally beautiful brothers, Liam and Luke) to the list of awesome Aussies. Thor: The Dark World is set for release in November 2013, but we won’t have to wait that long to admire Chris’ fineness. In Rush, a Ron Howard-directed film with a September 2013 release date, Hemsworth plays rival race car driver to champion driver, Formula 1 Niki Lauda. All we want to know is if this dangerous sport will mar Chris’ perfectly chiseled face. Lord, we hope not…

Thanksgiving 2012 gave us more to celebrate than stuffed turkeys and bloated guts. Chris delivered, on a silver platter, some raw bad-a** action in Red Dawn. We also got a side dish of The Hunger Games actor Josh Hutcherson, which gave us much to be thankful for. Sadly, this remake of the 1984 version by the same name was largely panned by critics. We’re not sure what the disappointed critics’ criteria for a great movie is, but on our Top 10 list of things a movie must have to be amazing is Chris Hemsworth.

Keep up on all things Chris Hemsworth — subscribe to our newsletter!

Snow White and the Huntsman

Ordinarily, we might be a bit annoyed that someone as gorgeous as Charlize Theron was cast opposite our Chris, but she plays such a b**** as the queen in Snow White and the Huntsman that we’ll overlook it. Hemsworth plays the studly huntsman who the queen orders to destroy Snow White. More battle scenes with Chris in body armor and on horseback? Slow-mo rewind anyone?

And now the moment you’ve all been waiting for. Those who drooled their way through Thor have long awaited Chris’ return in Thor: The Dark World. Well, grab your drool bibs ladies, because Thor is back. Momma might have told us to never date boys named Thor, but in this case, we’d make an exception.