Glee cutie Darren Criss has just announced he’s about to embark on a summer tour. 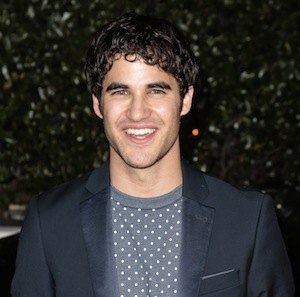 Blaine Anderson… I mean Darren Criss is going on tour.

Get your Glee fix with updates and recaps right here! >>

Kicking off May 29 in San Francisco, Criss’ “Listen Up” tour will visit 16 U.S. cities before ending in Silver Spring, Maryland, on June 30.

Criss’ website reports he is working on a new full-length solo album, so the tour will give fans a chance to hear the new songs before the album is released.

In a statement posted on Billboard.com, Criss said, “It’s a real opportunity for me to connect with all the people who’ve supported me through the years, as well as a chance to get new folks excited. It’s gonna be a party for everyone!” And who doesn’t love a good party?

NKOTB, 98 Degrees and Boyz II Men hit the road together >>

It’s a big week for Glee fans. First, the show was picked up for at least two more seasons, and now “Blaine” is coming to a city near you! It’s almost more than a Gleek can handle!

Until the lights dim and Criss takes the stage, check out Glee‘s Blaine Anderson and the Dalton Academy Warblers singing Train’s “Hey, Soul Sister.” If you ask me, it’s better than the original!

May 29: The Fillmore — San Francisco

May 31: House of Blues — Anaheim, California