Mad Men writers made a tiny chronological mistake on Sunday night, but it earned Christina Hendricks a dinner invite! 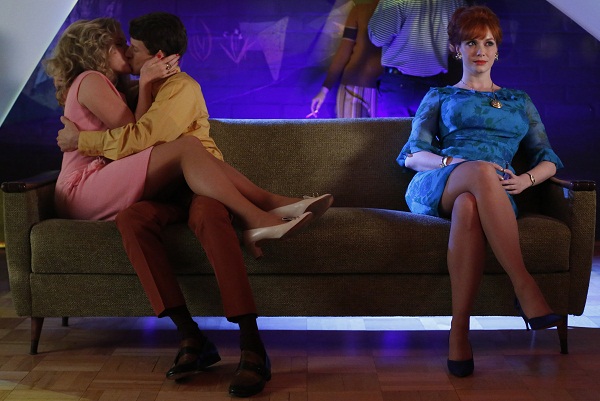 The people behind Mad Men work exceptionally hard to provide as accurate a setting as possible. Sometimes, though, they make mistakes. Like on this week’s episode, “To Have And To Hold”, when Joan’s friend came to visit. Joan (Christina Hendricks) suggested she make reservations to the uber popular Le Cirque. Only, the show is currently set in 1968 and restaurateur Sirio Maccioni didn’t open his legendary restaurant until 1974. Woops!

The tiny blunder worked out in Hendricks’ favor, though. Maccioni told The Hollywood Reporter that he was flattered to be mentioned on Mad Men, which he “consider(s) to be an outstanding American television drama.”

Not only is he a fan of Mad Men, but he seems to be a fan of Joan’s as well. He played right along with the show and the fun by saying, “If I had known she wanted a reservation specifically at Le Cirque, I would have opened our French restaurant sooner!” What a gentleman.

If they go out, Hendricks and Maccioni should read our Mad Men dating advice! >>

The flirting from Maccioni (who’s 81) didn’t stop there. Since he couldn’t open Le Cirque early for Joan, he’s extended a dinner invitation to Hendricks instead. He told The Hollywood Reporter that he’d love to have her as a special guest at the Chef’s Table.

“We will craft a special 1968-style French menu for her and her guests. My philosophy is that one must always give a lady what she wants. That never goes out of style.”

Oo la la! Sounds like someone has a crush on Christina Hendricks… and who could blame him? Maccioni may not be Don Draper, but we think Hendricks should accept his invitation. Classic French food, a kind, flirty dinner companion and the chance to do research in case execs change their minds about Mad Men‘s impending seventh and final season? Sounds like a win-win to us!