Is this really the end of the 31st century journey for our band of mismatched friends? Or just another bump in the road?

Related story We Talked to Broad City's Abbi Jacobson, & This Is What We Learned 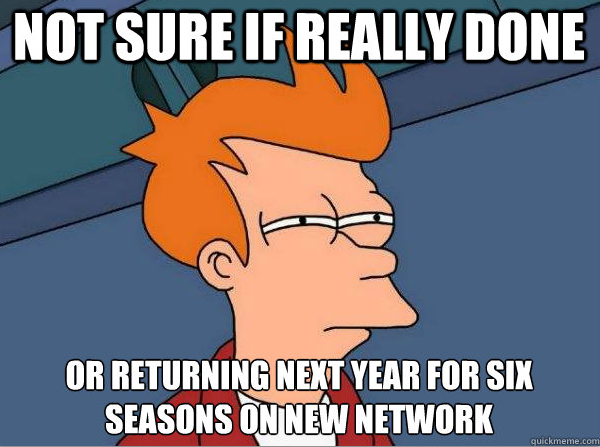 Rumor has it that Futurama is on its last legs, again. Execs have announced that the current and seventh season of Futurama will be the show’s last. But we’ve heard all this before.

The sci-fi animation has had a long and rocky past. The Simpsons creators, Matt Groening and David X. Cohen, developed the show and it quickly earned a strong fan base, but still had long moments of uncertainty. It began airing in 1999 on Fox, but was canceled after just four seasons. Futurama was then picked up in syndication for Cartoon Network’s late-night programming block, Adult Swim. The show lived on Cartoon Network for four more years until the contract expired in 2007. By early 2009, four direct-to-video movies had been created and released. Soon after, Comedy Central bought the rights to all previous episodes, as well as the movies, which they turned into 16 “new” half-hour shows to make for a fifth season.

Things have continued to look up for Futurama. In mid-2009, Comedy Central picked up the show for a sixth season of 26 new episodes, which aired in 2010 and 2011, and it was soon renewed for a seventh season. The first half of Season 7 aired in the summer of 2012. After a long break, Futurama will return for this summer to air the last half of Season 7 and (presumably) the final episodes of the series.

The guys created at least one inspirational character: Marge Simpson >>

Cohen, an EP, seems to feel like it’s been a long time coming. He recently told Entertainment Weekly, “I felt like we were already in the bonus round on these last couple of seasons… At this point I keep a suitcase by my office door so I can be canceled at a moment’s notice.”

Meanwhile, Groening released a statement that suggested he wasn’t quite ready to believe the cancellation. “I’m very proud of the upcoming season. If this is indeed the end of Futurama, it’s a fantastic finish to a good, long run.”

Hmm… The geeks at SheKnows are staying optimistic alongside Groening. We’re hoping to see Fry, Leena, Bender and the gang continue to explore the 31st century for at least a few more seasons!