Gwyneth Paltrow has gotten a lot of attention for the unusual lifestyle and diet advice she’s doled out for the last few years. She reveals in an interview that it was Leonardo DiCaprio who started her on a life of diet modification. 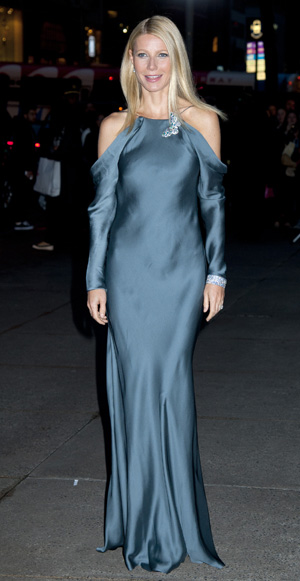 Before she was gluten-free, before the fasts, before the cupping, before she wrote a cookbook that made everyone make fun of her, Gwyneth Paltrow was a young woman who moved to NYC and made friends with Leonardo DiCaprio.

DiCaprio was then on a “meat is murder” streak, and he filled Paltrow up with the dirty details.

“I hung out with Leonardo DiCaprio when I moved to New York,” Paltrow said about the Great Gatsby star to the UK Guardian. “He was vegetarian and he’d talk about how dirty meat is and how bad factory farming is. I haven’t eaten red meat in 20 years and although Leo’s not totally responsible, he definitely planted a seed.”

Gwyneth said Botox made her look like Joan Rivers >>

A seed that grew into what frankly sounds like a food phobia. Like, it started with not wanting to eat “dirty” meat so she cut out red meat, and then more and more and more.

Paltrow told the Guardian that she became “seriously macrobiotic” when her father was diagnosed with cancer in 1999.

“I felt I could heal him by proxy,” she said.

In It’s All Good, Paltrow explains that the recipes, which are free of coffee, alcohol, wheat, meat, soy, shellfish, deep-water fish and processed food helped her “heal” and lose weight.

But on a Dr. Oz appearance, the Huffington Post notes, Paltrow attributed her dietary choices to concern over her children’s health: “My son has very bad eczema and he’s allergic to gluten and [my daughter is] allergic to cow dairy. I try to make everything gluten-free for him because the difference in his comfort is unbelievable when he’s sticking to what he’s meant to be eating. They eat Oreos, too, and they’re normal kids.”

Wait, so don’t Oreos have gluten in them? We’re so confused.