Halle Berry is a superhero diva. The Oscar-winning actress has returned for X-Men: Days of Future Past. Director Bryan Singer has released the first photo of Berry as the new and improved Storm. 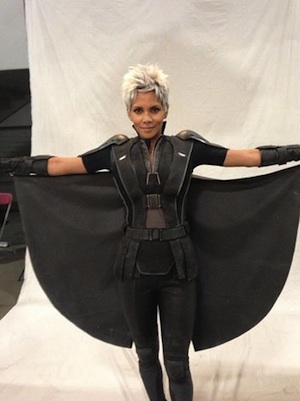 Bryan Singer is at it again. Ever since he began shooting X-Men: Days of Future Past, he’s been teasing fans with exclusive photos. The director is using Twitter to give sneak peeks of returning characters such as Iceman (Shawn Ashmore), Professor Xavier (Patrick Stewart) and most recently Storm (Halle Berry).

Monday, Singer posted a new photo from the set of the movie . This time, he highlighted Berry’s character. The actress is reprising the role, which she last played in X-Men: The Last Stand.

Berry appeared in the original X-Men trilogy, which ran from 2000–2006. She originated the character of Storm, a mutant with the ability to manipulate the weather. She also has the power of flight and was worshipped as a goddess in Africa before joining the X-Men.

Berry looks amazing! Storm has a new suit and hairstyle for the sequel.

The actress recently announced she was pregnant with her second child, which had some fans concerned. Storm is a major part of X-Men and people were worried that her role would be cut short.

Halle Berry is pregnant with #2 >>

We’re sure Singer and his talented costume team can and will accommodate Berry’s growing belly. Just look at the cinched design of her top. They’ve got it under control. We can’t wait to see what the rest of the cast looks like (we’re looking at you Anna Paquin and Ellen Page).

What do you think of Storm’s new look?