James Brown was known as “the hardest-working man in showbiz” but it looks like English singer/songwriter Ed Sheeran is giving Brown a run for his money. 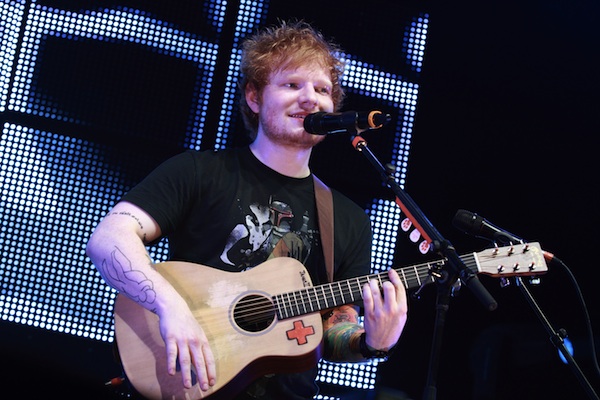 Songkick took concert data and calculated the numbers of shows a band or DJ played in a year and the number of miles traveled between venues. The result is pretty staggering.

First, according to the data, the hardest-working band in terms of number of concerts last year was American rock band, the All-American Rejects.

On their “Shaking Off the Rust” tour to support their fourth studio album Kids in the Street, the All-American Rejects played 171 concerts in 2012 — that’s almost a concert every other day!

Other bands at the top of the list include M83 with 154 shows last year, AWOLNATION who sailed to 145 concerts and the South African alternative metal band Seether, also playing 145 concerts last year.

Check out our review of “Oblivion” by M83 featuring Susanne Sundfør >>

But as far as miles traveled, the award goes to U.K. singer/songwriter (and possible Taylor Swift hookup) Ed Sheeran. The red-headed crooner of last year’s hit “The A Team” played 167 shows last year and traveled a total of 138,511 miles — enough to go around the world six times!

However, all this traveling and singing is before the website added in dance music DJs. Once the DJs are added in, the number of concerts stays the same but the distance traveled goes to the moon — literally.

Dutch house DJ Chuckie traveled over 290,000 miles between concerts last year alone — farther than the almost 239,000 miles it takes to get from Earth to the moon!

SheKnows talked to DJ Steve Aoki about this year’s tour >>

So why are the DJs traveling so much farther but playing the same number of concerts? Well Songkick posits that it is much easier to travel with all of your music on a computer than it is to travel with a guitar and drum kit.

And while that makes sense, you would think that the DJs would have done more performances than the bands. I mean, where exactly are these DJs jetting off to?

No wonder there are so many songs about being on the road! I just hope everyone’s racking up frequent flyer miles.

Do more shows/more concerts mean a better band? Let us know what you think in the comments.