Backstreet’s back… and now they have a star on the Hollywood Walk of Fame. 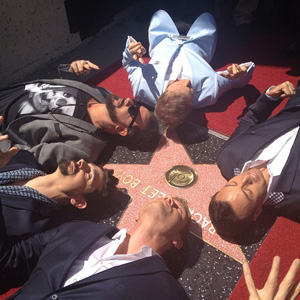 Want to feel old? The Backstreet Boys are celebrating 20 years together this month — and 17 since they released their first album.

And how are they celebrating that milestone? With a star on the Hollywood Walk of Fame!

Jam to these 20 flashback albums >>

“Huge day. Receiving a star on Hollywood blvd,” Nick Carter added. “WOW! Thank you to all our fans.”

The group gets the legendary Walk of Fame’s 2,485th star — located near the Live Nation building in Los Angeles.

Our teenage obsession — and, OK, adult obsession — with the five boys is finally validated.

The star isn’t the only exciting thing happening with the boys right now, though. They’re putting the final touches on their first album since Kevin Richardson rejoined the group. Oh, and they’re celebrating some wins in their personal lives, too.

The most recent? Richardson and wife Kristin are expecting their second child.

“The Easter Bunny brought a very special egg this year!” Richardson wrote on Facebook Apr. 14, along with a photo of his wife with a growing baby bump. The new baby will join brother Mason, 5.

Bandmates A.J. McLean and Howie Dorough also welcomed new babies — a daughter for McLean and a son for Dorough. Even Carter, the baby of the group, is about to get married.

“I had the ring in my pocket for two weeks,” Carter told People of proposing to longtime girlfriend Lauren Kitt. I was like, ‘I don’t want it anymore!’ It was driving me insane. I just wanted to get it out of my hands and on to hers.”

Congratulations to the BSB for all their accomplishments! Here’s to another 20 years.

Read on for more Backstreet Boys