The new Netflix series answers several of its own questions while also asking many more for a possible second season. 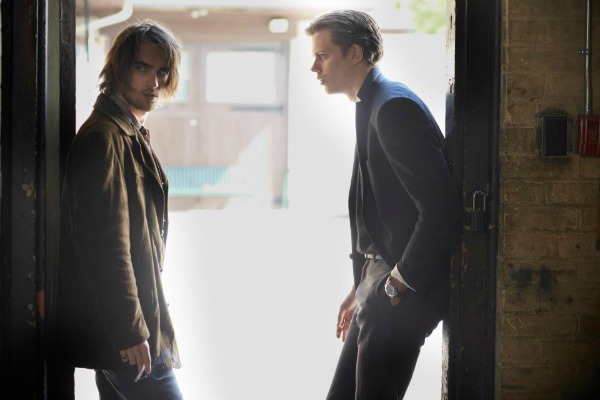 As I said in my review of the first episode, I found the beginning of Hemlock Grove very intriguing. But as I watched the entire series — all 13 episodes — in less than 48 hours, I discovered that the entire thing wasn’t quite as intriguing as I thought. Not that I disliked the series, but there were definitely parts that were better than others.

Hemlock Grove is about a very mysterious town of the same name where gruesome murders have taken place. Some people in the city are convinced that it’s a wild animal, while others seem to have knowledge of other types of creatures that could be involved. Two young men become close friends despite their very different upbringings, and decide to try to help solve the crimes. Both have knowledge and skills beyond our understanding and both have families that are steeped in mystery and otherworldly connections. The mystery of the killer is solved by the last episode, but many more questions are raised.

The friendship of Roman (Bill Skarsgård) and Peter (Landon Liboiron): Seriously, any time those two characters were on-screen together, I was instantly wide awake and extremely interested in anything they were doing or saying. The chemistry between Skarsgård and Liboiron was so good that I had no trouble believing that they could become so close so fast. I’m a sucker for a good bromance and this series definitely had that.

The music: Whether it was the inappropriately upbeat tune that played over the closing credits that came right after Peter’s transformation scene and the wolf has just eaten his body, or the somber melody of the opening credits or the countless scenes punctuated by rock tunes, the music in this series always seemed to be spot-on with whatever mood was being played on-screen. The music either matched the scene perfectly or, by being completely off-kilter to the scene (see the above reference to the upbeat tune after the werewolf transformation), punctuated the scene in such a way as to make it different than what you might interpret if you heard the dialogue alone.

The characters: In addition to Peter and Roman, I enjoyed all of the characters in this series. I honestly can’t think of a single one that I wouldn’t have wanted to see in the show. Even those that I loved to hate, such as Olivia (Famke Janssen), were portrayed so well and with such depth that I still couldn’t help but be enthralled by them. Some of my favorite journeys were by characters that weren’t necessarily in the foreground of the story, like the twin daughters of the police chief. No character in this series was one-dimensional, and I often found myself switching my opinions about who they were as the series progressed.

The dialogue: This series is full of people speaking in cryptic sentences to one another, and while that can be mysterious and fun, after 13 solid hours I wanted to smack most of them and say, “Talk like a normal person!” I do realize that this type of dialogue is cool and interesting to some people, but it’s just not my preferred way of storytelling.

It was a bit slow: If you’re expecting an action-packed horror-thriller, then this is not the series for you. Hemlock Grove gives you bits and pieces of its story very slowly, with a lot of somber music and cryptic dialogue along the way. For every moment that I found myself gasping in shock or excitement over what was happening, there were at least 10 more moments when I desperately wished that something — anything — interesting would happen.

Keep up with all things Hemlock Grove by subscribing to the SheKnows newsletter! >>

Overall, I did enjoy Hemlock Grove and if they do have a second season, I plan to watch it. However, I think I’ll do so in much smaller doses next time and perhaps won’t binge-view the entire series at once. For me, I think it will work better to see one or two episodes at a time.