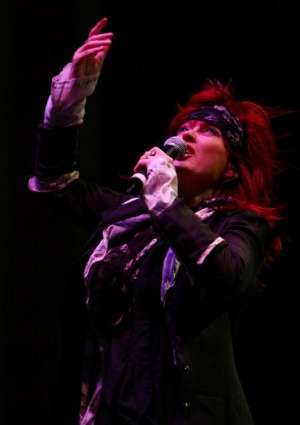 After a long battle with breast cancer and multiple sclerosis, The Divinyls lead singer Chrissy Amphlett has died. She was just 53 years old.

“Christine Joy Amphlett succumbed to the effects of breast cancer and multiple sclerosis, diseases she vigorously fought with exceptional bravery and dignity,” her musician husband Charley Drayton said in a statement.

“Chrissy’s light burns so very brightly. Hers was a life of passion and creativity. She always lived it to the fullest. With her force of character and vocal strength, she paved the way for strong, sexy, outspoken women,” he said.

Best known in the U.S. for the hit single “I Touch Myself” which reached No. 1 in Australia, No. 4 in the United States and No. 10 in Britain, Amphlett was a prolific singer and actress who enjoyed great fame in her home country of Australia.

She contributed to no less than 13 separate movie soundtracks, and after a 10-year hiatus tried to reunite The Divinyls in 2006 only to announce she had cancer a year later. In 2010 she performed songs from The Divinyls discography and others accompanied by a 30-piece orchestra for the Australian Rock Symphony.

As an actress, Amphlett appeared in multiple Australian television series, originated the role of Judy Garland in the touring production of The Boy from Oz and played Russell Crowe‘s mother in the stage production of the musical Blood Brothers. Crowe memorialized the performer on Twitter, writing, “Dear Chrissie, The last time I saw you was in the Botanic Gardens, loving life and reciting verse. That’s how I’ll remember you, your boy, R.”