Bill Clinton was honored by GLAAD this weekend and says his turnabout on gay rights is courtesy of his daughter (and her gay friends). 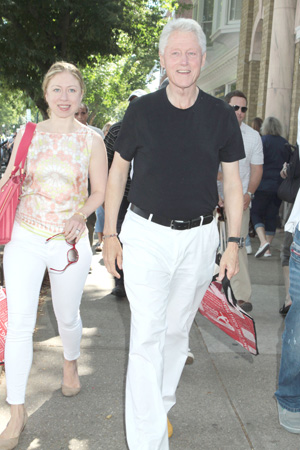 Chelsea Clinton radicalized her dad on gay rights, Bill Clinton admitted Saturday night at the Gay & Lesbian Alliance Against Defamation (GLAAD) annual dinner — and he regrets some of the moves he made as president.

“It’s sort of humbling when you get to be my age when your child knows more than you do about everything,” the 66-year-old ex-pres said about his 33-year-old daughter.

Clinton had a mixed record on gay rights during his presidency. After campaigning on the promise that he’d remove all restrictions against gays serving in the military, he enacted the halfway “don’t ask, don’t tell” measure that left an uneasy truce between the armed forces and the gay people serving in it.

Later, Clinton signed the Defense of Marriage Act (DOMA), which restricts federal benefits for same-sex couples and releases states from recognizing same-sex marriages. You may remember this act from the Supreme Court debates on it at the end of March of this year; a ruling on the act is soon to come from the court.

“I want to keep working on this until not only is DOMA no longer the law of the land, but until all people — no matter where they live — can marry the people they love,” Clinton told the GLAAD crowd. Meanwhile, a heckler in the crowd who clearly remembered when DOMA was enacted in 1996 shouted out “You signed it!” according to the Hollywood Reporter.

Apparently, Clinton got cozy with the gay folk over holiday dinners: “Chelsea and her gay friends have modeled to me how we should all treat each other regardless of our sexual orientation or any other artificial difference that divides us. Many of them come and join us every Thanksgiving for a meal. I have grown very attached to them,” he told the crowd, the Hollywood Reporter wrote.

Yep, the tranquilizing effect of turkey and wine makes friends out of even the bitterest of in-laws.

“And over the years, I was forced to confront the fact that people who oppose equal rights for gays in the marriage sphere are basically acting out of concern for their own identity, not out of respect for anyone else,” Clinton went on.

Right on, Bill Clinton! If only a teenage Chelsea Clinton had had gay pals she invited over for Thanksgiving dinner in the White House, DOMA might never have come to be.

Chelsea Clinton is hardly alone in her liberalism; her entire generation and the next is something of a society-wide gay/straight alliance. The Hollywood Reporter writes, “Younger Americans of every ethnicity, religion and region now approve marriage equality by substantial majorities, calling it a civil rights issue.”