The stars of At Any Price, Dennis Quaid, Heather Graham and Maika Monroe, talk about the farming drama, family and what it was like working with Zac Efron. 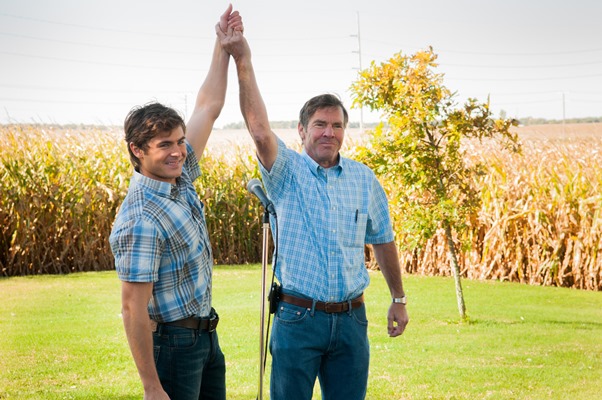 As a father, Dennis Quaid knows what it’s like to step back and let your kids make their own decisions.

“I want my kids to do whatever their hearts lead them to do,” he told SheKnows while promoting his new film, At Any Price.

The drama, centering on big-industry farming in Iowa, stars Quaid as Henry Whipple, a man who wants his son (Zac Efron) to follow in his footsteps and take over the family business. Efron’s character Dean, though, has his own plans and wants to be a professional race car driver.

Watch our interviews with the cast


It’s a serious role for Efron, and his fellow actors thought he did an amazing job with it.

“Zac is a great young actor,” said Quaid. “He’s got all the tools in the toolbox and he’s so dedicated.”

Heather Graham, who plays a love interest to both Quaid and Efron in the movie, was also impressed by Efron’s skills, but even more so by his dedication to his fans.

“He’s such a sweet guy and he’s so beloved by his fans, especially his young teenage girl fans,” she told SheKnows. “There was this one day when we had all these extras and they were like screaming at him. He stayed and took pictures with a hundred people. I’ve never worked with an actor who’s ever done anything like that.”

Heather has love scenes with both Dennis and Zac in the movie, so we had to ask, who was the better kisser?

“They are both really good kissers,” she laughed. “There were all these girls in the stands and I was like, ‘Hahaha, I get to do scenes with him,’” she said about Efron.

Newcomer Maika Monroe also steals the show in the film, portraying Zac’s young girlfriend who becomes somewhat of a surrogate daughter to Henry as well. She says working with this cast was a wonderful experience for her.

“I hope to continue to work with incredible people and incredible directors,” said Maika.

Be sure to catch the whole cast in At Any Price, in theaters today!