Sharp-eyed Mad Men watchers looked past the ’60s styling and glimpsed an actor who was a 1980s fave. But everyone hopes Ted McGinley’s appearance doesn’t presage anything sinister. 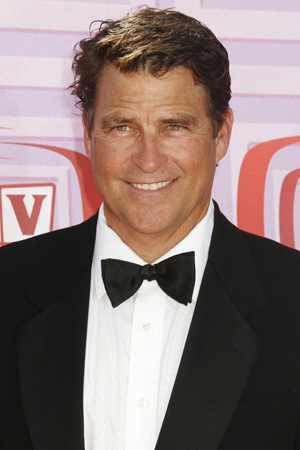 He’s older. He’s chunkier. He was well-hidden behind thick glasses and slick 1960s hair. But yep, that was Ted McGinley, the “patron saint” of shark-jumping on last night’s episode of Mad Men, “To Have and to Hold.”

McGinley played the head writer on the soap opera on which Megan stars; he and his wife took Don and Megan out to dinner on the show and offered a unique dessert: “Grass” and swinging back at their pad.

Younger viewers may have a hard time placing McGinley, as his heyday was during the 1980s (when he had high-profile roles on huge shows like Happy Days, the Love Boat and Dynasty, as well as an iconic role as a too-cool-for-school fratboy in 1984’s Revenge of the Nerds), and the 1990s, when he played the husband to Amanda Bearse’s Marcy D’Arcy on Married… with Children.

But McGinley’s real claim to fame isn’t any of the dozens of eye-catching roles he’s played. No, McGinley’s big cultural cachet is being known as a “show killer,” i.e. when he’s cast on a show, the show is swiftly canceled thereafter.

Jumptheshark.com founder Jon Hein named McGinley “the patron saint of shark-jumping” for contributing to “the deaths of various TV shows.” A show that casts McGinley, goes the reasoning, is soon to die.

Is Mad Men signaling its status as a pop culture juggernaut is over? Is creator Matt Weiner having a little fun with the audience? Or did he simply cast McGinley because he thought the actor could do a good job with the slim role of Mel?

Weiner’s not talking. But since he’s shown a notable propensity to cast formerly well-known actors who have fallen off the cultural radar (See: The episode in which Roger takes LSD with My So-Called Life mom Bess Armstrong, Saved By the Bell’s Dennis Haskins as a Cool Whip scientist, the casting of How to Succeed in Business Without Really Trying’s Robert Morse as Bert Cooper), this writer guesses the answer lies therein.