On this episode of Once Upon a Time, called “Lacey,” Gold discovers that getting Belle to fall in love with him may be more challenging than he thought. 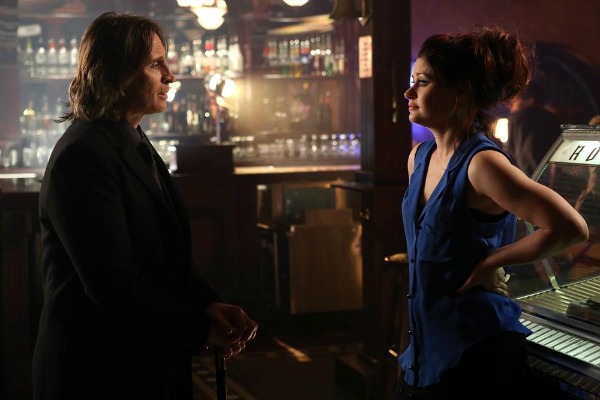 This episode begins with Henry’s (Jared Gilmore) birthday and Mr. Gold (Robert Carlyle) telling Regina (Lana Parrilla) that his son is her son’s father — which makes Gold Henry’s grandfather. She takes that about as well as you’d expect and once again decides to ruin a few lives. With a slight nudge, Regina reminds Belle (Emilie de Ravin) of who she was, and suddenly the amnesia disappears and Belle gets her memories back — only trouble is, they’re the wrong ones. It seems that before we knew Belle, she too had an alternate life in Storybrooke and hers involved drinking booze, playing pool and cozying up to low life guys in a bar.

Recap of the last episode of Once Upon a Time: Retribution at last >>

Once Gold discovers what’s happened, he goes to David (Josh Dallas) of all people and asks for help. Gold’s sort of brother-in-law (I mean, how else do you describe their familial relationship?) tells him to introduce Belle to the man she fell in love with so he tries to do just that. Along the way, he remembers a time when he and Belle were back in Fairytale Land and she stopped him from killing Robin Hood (Tom Ellis). So Gold put on his best manners and tries to be the sweet(ish) beast she fell in love with.

That’s where things got very interesting. When Gold was being Mr. Nice Guy, Belle (aka Lacey) had no interest in him. But as soon as he lost his temper and reverted to being an evil monster, suddenly she’s a smitten kitten. Can I just say how much I loved that twist? As much as I do like it when Belle brings out the sweet side of Gold, I really am tickled by the idea that — with her faulty memories restored — she is turned on by his innate evilness.

Want to get the latest updates about Once Upon a Time delivered straight to your inbox? Sign up for our SheKnows newsletter! >>

Elsewhere in Storybrooke, Mary Margaret (Ginnifer Goodwin) and David show Emma the secret field of magic beans that Anton (Jorge Garcia) has been growing. Mary Margaret is now on board with the idea of going home, but something tells me it’s going to take a bit more to convince Emma. Though her mind could be changed by whatever evil plan Greg (Ethan Embry) and Tamara (Sonequa Martin-Green) have cooked up — especially now that they have kidnapped Hook (Colin O’Donoghue) and will undoubtedly find a way to make him do their bidding.

The look on Regina’s face when Gold told her that Neal was Henry’s father.

“If your own son couldn’t bring out the good in you, who will?”

“You always brought out the best in me and right now I need that.”

Rumple complaining that Belle’s crying was keeping him from spinning.

The look on Rumple’s face when Robin’s arrow did indeed find him.

“That way, Anton could do what he does best.”
“Actually, you haven’t seen me play darts yet.”

“If you go back, we think you might be able to have your happy ending.” 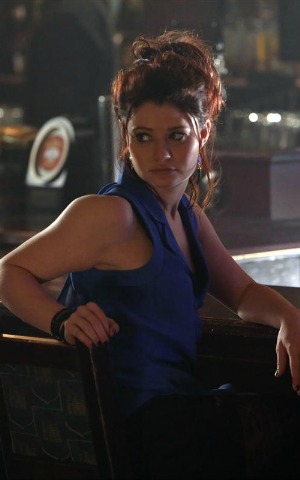 The look on Gold’s face when he spotted “Lacey” playing pool.

Belle releasing Robin from the dungeon.

“You want me to help you?”
“Well I’m certainly not here for the overly-praised lasagna.”

Emma pointing out to Regina that she planned to tell her about Gold being Henry’s grandfather, but she had been too busy trying to stop Regina from killing her entire family.

“Unlike you, the rest of the world isn’t always scheming to get what they want.”

Belle grabbing the bottle and pouring herself a bigger glass of wine.

“I just don’t get why people are scared of you. I see a man who wouldn’t hurt anyone.”

Belle realizing that Robin stole the wand to save a woman’s life.

“You are not the kind of man to leave a child fatherless.”

“You’re not who I thought you were, and I’m glad.”

Laughing out loud at the sight of Neal at Emma’s door with Henry slung over his shoulder.

“What, did you tranquilize him?”
“Just gave him a couple of bourbons. The kid’s a lightweight.”

Neal commenting that Henry and August had been playing at the park. And here I thought I would go an episode without getting angry about August going back to a little boy. Sigh.

What did you think of this episode of Once Upon a Time? Do you think that Belle and Gold are going to get back together now? What do you think Greg and Tamara are planning to do with Hook?