Reese Witherspoon and her husband, Jim Toth, had quite the experience on Friday night: They were both arrested, according to a new report. 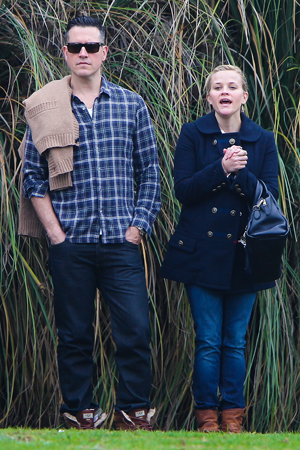 Reese Witherspoon’s husband, Jim Toth, might have been arrested for driving under intoxication on Friday night, but she also found herself in handcuffs after an altercation with police.

According to Variety, Toth’s 2013 Ford Focus was pulled over by Atlanta police early Saturday morning after officers spotted the car weaving through lanes on Peachtree Street. The Oscar-winning actress is in the city filming The Good Lie.

The Creative Artists Agency agent admitted to drinking earlier in the evening and had a blood alcohol level of .139, according to the official police report.

Then things got interesting. According to the police report, an officer asked Witherspoon to stay inside the vehicle.

“Mrs. Witherspoon began to hang out the window and say that she did not believe that I was a real police officer,” according to the report, obtained by Variety. “I told Mrs. Witherspoon to sit on her butt and be quiet.”

The mother of baby Tennessee then told the officer that “she was a ‘US citizen’ and that she was allowed to ‘stand on American ground.'”

Then she pulled out the “Don’t you know who I am?” card.

“Mrs. Witherspoon asked, ‘Do you know my name?’ I answered, ‘No, I don’t need to know your name.’ I then added, ‘right now.’ Mrs. Witherspoon stated, ‘You’re about to find out who I am,'” according to the report.

She was later detained for disorderly conduct while Toth was charged with DUI. They were released on bond around 3:30 a.m. Saturday morning, according to Variety.

Witherspoon’s arrest is pretty surprising, given that she’s maintained such a squeaky-clean image in Hollywood. She’s managed to keep her life pretty much out of the gossip spotlight, despite her tumultuous divorce from ex-husband Ryan Phillippe.

She even blasted publicity-hungry starlets at the 2011 MTV Movie Awards.

“I get it, girls, that it’s cool to be a bad girl,” she said. “When I came up in this business, if you made a sex tape, you were embarrassed and you hid it under your bed.”

“And if you took naked pictures of yourself on your cell phone, you hide your face, people!” she continued. “Hide your face!”

Looks like even the good girls can make a few bad choices from time to time.

Tell us: Are you surprised to hear about Reese Witherspoon’s arrest?