Chris Janson’s early start in music gave him a lot to write about. Hear it from the country singer himself. 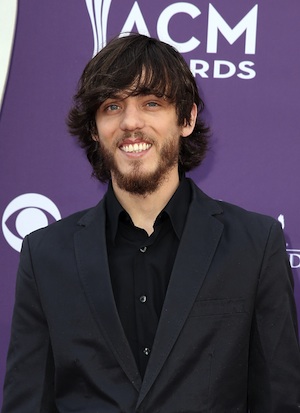 He’s a guy from Missouri who began songwriting and playing instruments at age 11, but country singer Chris Janson almost never made it to Nashville.

SheKnows had a chat with Chris on the famous Fremont Street in Vegas while he was there for the ACM Awards.

Janson explained that he was going to be a veterinarian, but then he said, “Nashville was calling my heart.”

So instead of going to vet school, Janson packed his bags and moved to Nashville at the age of 18.

The loss for cats and dogs is our gain, as his single “Better I Don’t” is currently on the country charts.

Which country guy from Love and Theft is the subject of a Taylor Swift song? >>

Janson explains that his songwriting is based on real life. He says he gets inspiration from everywhere, including “my life… love, my family, my kids, my past.”

Speaking of his past, if “Better I Don’t” is any indication, there’s a wild child inside Chris Janson. He explains that some of that song is rooted in truth, as with the following lyrics, which describe events that actually happened:

“Well I was wearing the cuffs when the warden said, ‘Just tell me the truth,’
I was mindin’ my own business at a hundred and five,
?I was a county road cruisin’?,
outrunning the blue lights.”

Speeding and running from the cops? Tsk, tsk, tsk.

Mind you, another of Janson’s lyrics from “Better I Don’t” is “And I’ve been known to get onstage in nothing but my boots.”

Sorry we weren’t there for that one, Chris.

Meet the country cuties from Parmalee >>

Ultimately, Janson wants to be known as a storyteller through his songs. A year from now, he’d still like to be playing the Grand Ole Opry, he hopes his family will still be happy and he hopes to still be working. Sounds like a perfect plan — he just needs to check and make sure he’s wearing pants before stepping onstage.

Chris Janson is on tour now. Check out our interview with him:

So what do you think of Chris Janson? Check out the video and let us know in the comments below!