Chris Hemsworth is suited up and ready for battle. The actor’s back on superhero duty for Thor: The Dark World. He’s front and center in the movie’s first official poster. 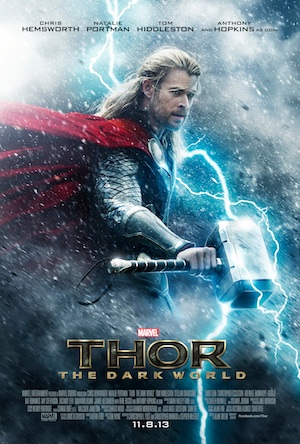 Iron Man’s not the only Avenger returning to theaters. The god of thunder is also making his presence known. Disney and Marvel Studios are prepping Thor: The Dark World. It’s the sequel to the 2011 hit starring Chris Hemsworth.

Once again, the Australian actor reprises his role as the Prince of Asgard alongside onscreen brother Tom Hiddleston (Loki). In The Dark World, Thor will encounter a new villain called Malekith. The character’s played by former Doctor Who Christopher Eccleston.

Malekith is the leader of an ancient race that’s hell-bent on revenge. His plan is to push the universe back into darkness — hence the film’s title. Malekith is so powerful that even Odin (Anthony Hopkins) can’t reel him in. Therefore, Thor steps up to protect his people.

The first Thor grossed over $449 million worldwide. The film was directed by Kenneth Branagh and is considered the breakout movie for both Hemsworth and Hiddleston. Marvel’s hoping to experience the same success with the follow-up when it opens this fall.

Next week, the studio will unveil the first trailer for The Dark World on iTunes Movie Trailers. Mark your calendars, as it’s scheduled to premiere Tuesday.

What do you think of the teaser poster for Thor: The Dark World?