Hollywood is trying to share a little light and laughter with the Boston police and FBI agents who have worked tirelessly after the Boston Marathon bombing. The Heat, starring Melissa McCarthy and Sandra Bullock, will offer a special screening to law enforcement as a token of appreciation. 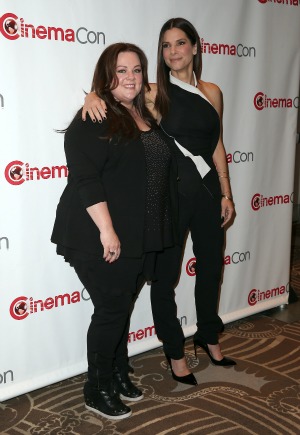 When tragedies occur, it is always nice to see how the community bands together to show its support and strength. On Thursday, at the film conference CinemaCon, director Paul Feig told Access Hollywood he wants to show his appreciation to the city of Boston’s police officers and FBI agents.

Feig’s new film, The Heat with Sandra Bullock and Melissa McCarthy, will get a special screening since the movie was made right in Beantown last summer. Bullock plays an FBI agent and McCarthy portrays a Boston cop in the female buddy movie.

When Access Hollywood gave the news to Bullock on the CinemaCon red carpet, she replied, “That’s a great idea. It’s news, but that’s a really great idea.”

The Oscar winner also shared her thoughts on this week’s events. Bullock said: “That city is made up of amazing, strong, loyal, kind, giving people, and you saw that once everything happened. You saw the amount of people that rushed into the danger and just helped everyone. All tragedies — it brings out the best in people and you just see what a great, great, great place Boston is.”

Feig was quite impressed with the city’s citizens. He praised them to CNN: “They are some of the finest people I’ve ever worked with. Boston is in good hands if they have to go through something like this. They are in the best hands possible.”

While the screening is obviously only a small gesture, given the magnitude of this week’s tragedy, Bullock hopes the film can bring a little light and laughter to the responders.

She told CNN, “It’s been an amazing, tight-knit community before this happened, and it just bonded a community even more. I don’t think a screening would ever be enough, feel like it’s enough to do for them.”

McCarthy added, “It’s a remarkable place, an amazing city that’s obviously going through a really tough situation. I have a sweet spot for it now.”

The Heat will hit the big screen on June 28. There is no word on when the special Boston screening will occur given the fact that the Boston manhunt is still ongoing. However, Feig promises his film will be a “love letter to Boston.”