Production on David O. Russell’s next film, American Hustle, was halted due to the Boston manhunt for the 19-year-old marathon-bombing suspect. The film stars Bradley Cooper, Jennifer Lawrence and Christian Bale. 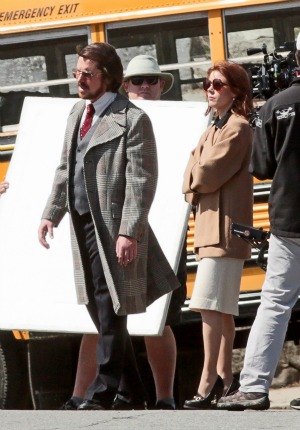 While the city of Boston continues to be on lockdown due to the manhunt for the marathon-bombing suspect, Dzhokar Tsarnev, production in the area has also been halted. David O. Russell’s current movie, American Hustle, has suspended filming in the city in compliance with law enforcement orders.

A Sony spokesperson told Deadline on Friday, “The production is heeding the governor’s request to remain indoors.”

The production started filming on March 8 and then moved down to Worcester, which is west of Boston. The crew was to start back up on the evening of April 17 in historic city and continue though May. Today would have been the 24th day of shooting in the 42-day schedule , according to the LA Times.

One interesting note is that the events in the movie take place in New York and New Jersey, but Massachusetts was chosen as the filming location because of the state’s generous tax incentives. The delay in filming due to the manhunt will affect the film’s budget. The film is scheduled to be released on Dec. 25.

Currently, Russell’s film is the only Hollywood production in town, even though the state has seen a boost in production over the last several years. According to the Massachusetts Film Commission, Grown Ups 2, Labor Day with Josh Brolin and Kate Winslet and The Makeover with Julia Stiles have all recently wrapped.

There is no word on when production will resume since the Boston manhunt is still ongoing as this article goes live.