Netflix’s new series begins with an episode full of mystery, monsters and mothers. 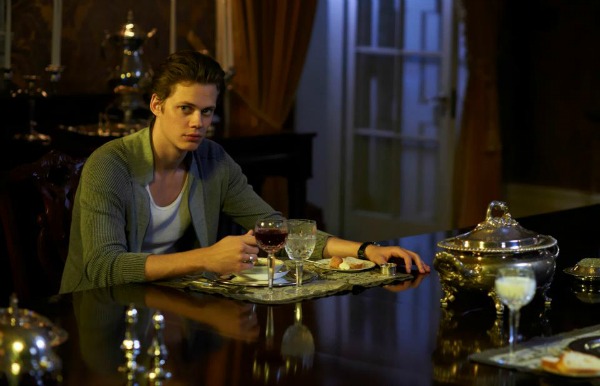 Hemlock Grove is part of a new era in TV shows. In fact, I don’t even know if it qualifies as a TV show per se, since most people probably won’t be watching it on their televisions. With none of the fancy accessories to attach my TV to my computer, I watched this first episode straight from my laptop. That presented a few challenges — for one, the episode kept freezing, probably due to my internet connection — but I was able to get through the entire first episode, called “Jellyfish in the Sky.”

So far, I have to say that I’m intrigued. The cast and creators spoke at WonderCon recently and made it clear that the series was shot in such a way that people could binge-view it in one sitting if they chose. That means that it’s presented very much like a 13-hour movie and makes reviewing the first episode kind of like reviewing the first five minutes of a film. We’ve been given a bit of information about the characters and the town they live in, but really only enough to whet our appetites for more.

One thing I found interesting about the series so far is that both of the lead characters are being raised by single mothers. Both Peter (Landon Liboiron) and Roman (Bill Skarsgård) appear to have deep bonds with their mothers, though for very different reasons. Peter and his mom (Lili Taylor) seem to be kindred spirits who live in close harmony with one another, while Roman and his mother (Famke Janssen) are tied together through a world of secrets that I feel we haven’t begun to scratch the surface of yet.

The beginning of the episode opens with a young woman being brutally attacked by something that basically tears her apart and eats her. After that, we’re slowly introduced to the people in the town where the attack took place. In addition to Roman and his mother, and Peter and his mother, we also meet Roman’s uncle Norman (Dougray Scott). Norman’s brother killed himself after Peter’s younger sister was born because he couldn’t handle her monster-like features.

Keep up with all things Hemlock Grove by subscribing to the SheKnows newsletter! >>

As for who, or what, attacked the girl, that mystery is still up for grabs. Peter is accused of being a werewolf by a young girl who stumbles across his property, but at the moment it doesn’t feel like it’s within his character. He seems to know exactly who and what he is and right now I can’t imagine that he would do it. To me, Roman is more of a wild card. With his sister having visible differences, it’s more than likely he’s got something growing inside of him, too. But he doesn’t appear to know what it is and that could point to him as the culprit. Then again, Olivia was acting pretty suspicious during the episode and we still don’t know who — or what — she is either. It’s possible that she could have killed the cheerleader. If she did, then the question would be why, as I don’t think that woman does anything that isn’t completely under her control.

All 13 episodes of Hemlock Grove are now available for viewing on Netflix. If you’ve seen the first episode, what did you think? Are you planning to binge-view the entire series?