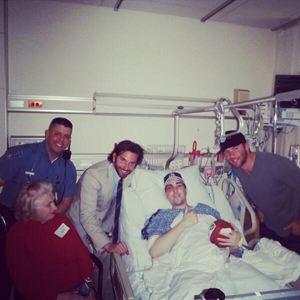 One of the most horrific images to emerge from the Boston Marathon bombing was of Jeffrey Bauman Jr. The spectator at Monday’s race had both of his legs blown off by the blast — an injury captured by photographers and transmitted around the world.

Fast forward a few days: Bauman Jr. is recovering in a Boston area hospital and seems to be doing well, judging from a photo posted to Twitter by New England Patriots wide receiver Julian Edelman.

In the shot, a smiling Bauman Jr. poses with Edelman and actor Bradley Cooper.

“Visited #survivor #stud #hero Jeffrey Bauman Jr. today. He was looking great and is a true inspiration. #strong,” Edelman tweeted on Thursday, along with the photo.

Cooper — in the city filming David O. Russell’s American Hustle with Jennifer Lawrence — flashed his famous smile while posing for the shot.

This isn’t the first time the actor has visited survivors in the hospital, though he doesn’t seek publicity for it. The actor even thanked the heroes he’s visited with helping him prepare for his role as Pat Solitano in the Oscar-nominated Silver Linings Playbook.

“The coolest thing about me playing Pat Solitano was being able to go around the country and seeing all the men and women, the vets who have suffered from post-traumatic stress disorder and the real need that we have to develop a strategy to take care of them,” he said at the 2013 MTV Movie Awards. “More people have committed suicide last year than died in the field of battle and it’s an epidemic.”

As for Bauman Jr.? He’s definitely a hero: Despite his injuries, he was able to give police a description of the Boston Marathon bombing suspects, Dzhokhar Tsarnaev and Tamerlan Tsarnaev.