Some took offense when singer Justin Bieber left a note at the Anne Frank House in Amsterdam saying that he hoped Frank would have been a “belieber.” But it coulda been, says her stepsister. 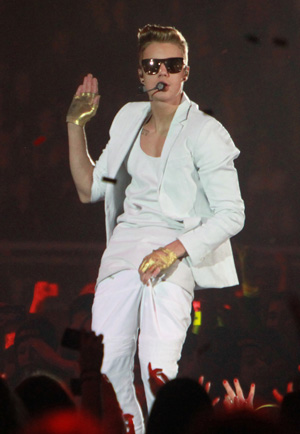 Days after Justin Bieber started an international outcry with a message he left at the Anne Frank House, Anne Frank’s stepsister rushes to his defense.

After visiting the Anne Frank House in Amsterdam, Bieber, 19, left a note in the guestbook that the museum later posted on Facebook.

“Truly inspiring to be able to come here. Anne was a great girl. Hopefully she would have been a belieber,” the 19-year-old pop star wrote.

Why Justin Bieber’s new endorsement may be harmful >>

Commenters were not kind, calling Bieber “a little idiot” who’s “way too full of himself,” and saying in a few years Bieber would be “a punchline.” Ouch.

But Frank’s 83-year-old stepsister and Auschwitz survivor Eva Schloss told Britain’s Telegraph that Bieber may well have been right: Anne Frank would have dug him.

“It’s so childish,” said Schloss. “He’s a young man and she was a young girl, and she liked film stars and music.”

What Bieber meant, a source told the New York Daily News, was “it would have been an honor if Anne Frank had been a fan.”

The museum itself seemed a bit abashed by the controversy; Spin reported that the Anne Frank House released a statement saying they were honored by the visit: “The Anne Frank House was pleased to welcome Justin Bieber to the Anne Frank House last Friday. We think it is very positive that he took the time and effort to visit our museum. He was very interested in the story of Anne Frank and stayed for over an hour. We hope that his visit will inspire his fans to learn more about her life and hopefully read the diary.”

“He’s a 19-year-old boy taking the effort to come and see the museum, and we’d like to point that out, and I think it’s quite innocent what he put down,” the statement went on, according to Spin.

You know, kids in Amsterdam. Some kids would have spent the whole time in the red-light district rather than learning about Anne Frank.