Easygoing Joel McHale, the lead on Community and longtime host of The Soup, isn’t bothered at all by rumors that he likes man candy. In fact, he says it’s flattering. 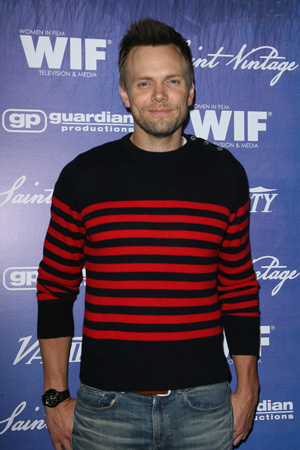 Joel McHale knows that rumors have circulated about his sexuality for years, and he doesn’t mind one bit.

“I always find it really weird when guys flip out over someone thinking they might be gay. If a guy gets offended by that, there’s something’s wrong with him. I take it as a compliment,” the Community star and The Soup host McHale told The Advocate.

Oh, he is so right! As the saying goes, “He’s too hot to be straight.” Gay rumors fly about gentleman who are well-dressed and good-looking; if someone says a shirt makes a fella look gay, that’s a good thing.

The cast of Community will live forever as puppets >>

McHale (married, father of two) knows that, and doesn’t care. When the Advocate told him that gay blogs had been running screenshots of McHale nude culled from the DVD extras for Ted, McHale cracked, “Wow, maybe I should start posting photos of myself naked with ‘Community‘ written across my lower stomach. I was actually aware of that because of the number of tweets I got about it. As long as the comments about my body are positive, I don’t mind.”

McHale also said he appreciates Community’s gay following: “Community needs all the help it can get, so thank God for our gay fans. Our young gay fans especially are the loudest and most Internet-savvy. That also speaks to the quality of our show, which I think is highly intelligent.”

Joel McHale’s past life as a college football player >>

Gay fans (and McHale) love the character Dean Pelton, whose sexuality is presented as ambiguous: “You’re not really sure what’s going on with his sexuality — other than the fact that he likes to play dress-up and has a Dalmatian fetish,” said McHale.

He joked that men do hit on him sometimes: “Much like in Say Anything, guys usually stand outside my house with a boombox over their head blasting the Indigo Girls. Actually, guys sometimes will tweet me, ‘I’m in L.A. Staying at such-and-such hotel. What do you think?’ Of course, it all depends on the quality of the hotel.”

He also said that when he first moved to Los Angeles, he accidentally arranged to meet a friend in a gay bar and was confused by all the attention he kept getting from patrons. “Guys kept coming up, asking, ‘What’s going on, man?’ I figured they’d seen the commercials I was in. Then I realized that these men were coming on to me because I was alone in a gay bar.”

Ah! So what would have been the best next move for McHale in that situation? “Just a very quick, courteous [act of oral sex],” McHale said.