What a week. It’s easy to get depressed as we mourn lives lost in the Boston Marathon bombings and the explosion in Texas, while we sympathize with survivors and loved ones left behind. If you find yourself in need of that satisfied sigh you feel at the end of a couple of hours of escapism, hunker down in front of one of these movies this weekend. 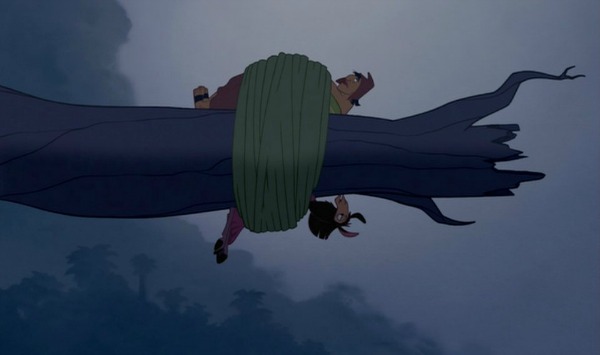 Few things can put us in good spirits like the innocence of a kids’ movie. There are endless titles to choose from in this category but we like this one because it is lesser known and hilarious. It should be a staple of every adult/parent’s movie collection. Before David Spade and Patrick Warburton teamed up on Rules of Engagement, they (along with John Goodman) provided the voices and hilarity for this title. An overindulged emperor has a spell cast on him that puts him at the mercy of a village peasant who the emperor had treated poorly.

The younger set may have looked this one over, but there is a reason this Steve Martin and John Candy classic has become as much a Thanksgiving tradition as the dinner itself. Steve Martin is a frustrated traveler trying to get home to his family by Thanksgiving when he accidentally hitches his kite to the annoying but endearing Del (John Candy). Tell us you don’t tear up every time you see Neal’s wife come down the stairs or when Neal starts to replay some of the things Del has said and done during their misadventure, figuring out what his new friend was trying to tell him all along.

The Pursuit of Happyness

Obvious though this title may be, it should be shown in every high school auditorium across America. The spirit of Will Smith’s incredibly acted character, Chris Gardner, is what made this country what it is. Chris’ determination takes us on a gut-wrenching journey that has us cheering, applauding and crying tears of joy by the end.

Keep up on movie premiers, updates and gossip. Subscribe to our newsletter!

If you’re in the mood for a little female empowerment, dial up this 1980 classic starring Jane Fonda, Dolly Parton and Lily Tomlin. Stuck in a Mad Men-esque work environment with a vile, sexist boss, these women hatch a scheme to get even that will have you saying, “Mmmm hmmm. That’s right, girrrl.” During a devastating time when we feel so powerless, there’s nothing like a good revenge movie (void of real violence) to bring us back to center.

March of the Penguins

If you skipped over this when it was released, use this weekend to rectify that misstep. There is nothing like the perseverance of Mother Nature to bolster our spirits and give us hope for tomorrow. This true tale, narrated by the smooth-voiced Morgan Freeman, takes us on a visit to one of nature’s superheroes — the Emperor penguin. It may sound silly, but once you see what these animals have to and are willing to do to survive, find a mate and have a family, you will be awed and inspired.

New Man of Steel trailer debuts
Exclusive clip: The English Teacher
Battle of the flicks: Oblivion vs. To the Wonder