Before Ann Curry was shoved off Today, she had to put up with a whole bunch of mental cruelty. A new book details who did what. 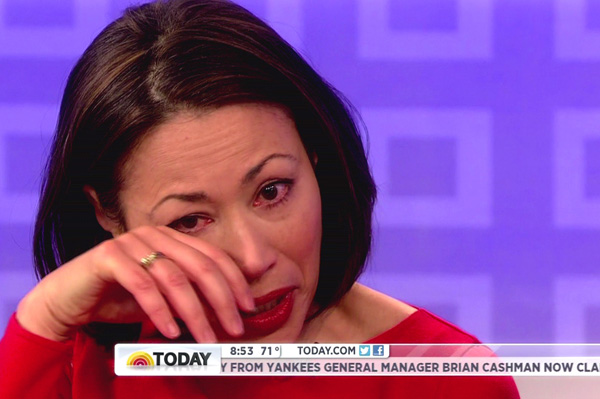 Ann Curry still wakes up pre-dawn and cries over her ouster from Today.

That’s how bad her ouster from the morning show was last summer, as author and New York Times reporter Brian Stelter details in his new book, Top of the Morning: Inside the Cutthroat World of Morning TV. New York Times Magazine published an excerpt of the book this week, revealing the cringe-worthy details of Curry’s last days on the show.

It seems that some of Curry’s co-workers were great big bullies, particularly Today’s executive producer Jim Bill, who reportedly commissioned a blooper reel of Curry’s on-air mistakes to humiliate the co-anchor. The show’s largely male control room staff also reportedly spent “a lot of time” making fun of Curry’s outfits. Once they even made an image of Big Bird aside Curry in a yellow dress, with “Who wore it best?” below.

Co-host Matt Lauer was no Curry fan either; the book details how Lauer became angered by Curry’s on-air mistakes like whispering dramatically to grieving guests and difficulties reading the teleprompter. “I can’t believe I am sitting next to this woman,” he reportedly complained to a production assistant.

Katie Couric was supposedly annoyed by Curry as well. After Curry asked to be her main replacement whenever Couric had to be away, Couric allegedly called her “melodramatic” and “fake.”

Eventually, the resentment against Curry coalesced into an actual plot. Bell called the plan “Operation Bambi,” because someone remarked that getting rid of Curry would be like shooting Bambi.

As everyone knows, Operation Bambi succeeded. Curry made a tearful departure from the show June 28, 2012. Stelter reports that later that day, Bell took the show’s producers to “high-end NBC cafeteria” Brasserie Ruhlman and led the group in an exultant toast to celebrate Curry’s exit.