Eric and Stephen, the country cuties that make up Love and Theft were living it up in Las Vegas for the Academy of Country Music Awards. SheKnows had a chance to talk to the guys before the big night. 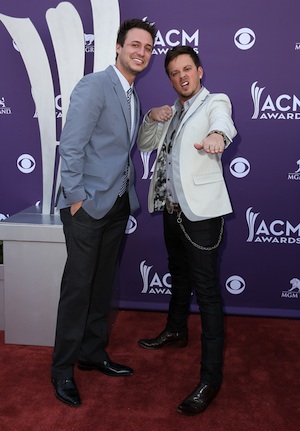 SheKnows caught up with the boys (Stephen Liles and Eric Gunderson aka Love and Theft) before the awards ceremony at the ACM Experience in Las Vegas and they had their own plans of how they were going to get their faces on TV that night.

“We are going to jump up on our chair and scream and go crazy so it draws more attention to us than [the people on stage] so they will be forced to cut to us,” Eric said.

Unfortunately, they weren’t able to accept any awards at this year’s ACM Awards. They didn’t win in either of the two categories in which they were nominated. Thompson Square won Vocal Duo of the Year and Florida Georgia Line won New Vocal Duo of the year, but they sure had a lot of fun while they were there.

The guys, who are on tour right now with Tim McGraw and Brantley Gilbert, talk a bit about hanging out with other famous country stars — even if those other stars don’t know who they are.

Stephen jokingly explained, “I’ve met [Brantley Gilbert] like five times and every time he’s like, ‘nice to meet you’ and it’s getting annoying.”

Seriously though, the guys are glad to be touring with McGraw again — having toured with him and Lady Antebellum in 2010. Stephen went on to say, “It’s nice that he’s bringing us back. It means that we didn’t cause too many problems [the first time].”

However, Stephen also inferred that he and Eric party a little harder then their tour mates so, “We are going to have to lay low so we don’t get kicked off the tour.”

Tim McGraw talks about his sobriety >>

They also hinted to our SheKnows correspondent Lauren Kelly that even though their second album came out in July 2012, they are constantly working on new music — giving Lauren an impromptu sample right on the spot.

But getting a straight answer out of these two is not the easiest task. When asked what they would do if the world ended tomorrow, they both hinted that their answers involved a lot of guns.

While Eric is going to live forever, the long list of game he would like to kill — including 19 bearded turkeys, 16 boar, 36 deer and six bucks — probably won’t make it through the fall.

Stephen jokingly (or maybe not) adds that he’s going to Australia to kill a kangaroo.

I can totally see why Taylor Swift wrote a song about him. That’s right. According to People magazine, Swift’s song “Hey Stephen” where she talks about a boy who looks like an angel is all about her crush on Mr. Stephen Liles of Love and Theft.

Check out the video below and see if you can see what Taylor saw: