The Lone Ranger and Tonto ride again! Armie Hammer and Johnny Depp tackle the iconic characters in an all-new adventure. 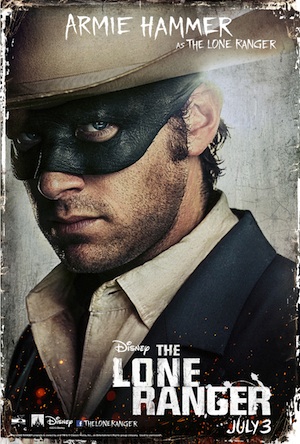 Walt Disney Pictures has released the third trailer for The Lone Ranger. It’s an international version that features new footage and tons of action. The film stars Armie Hammer as the title character and Johnny Depp as his partner, Tonto.

The latest trailer reveals the Lone Ranger’s painful origin story and how he and Tonto turned their joint tragedy into triumph. Thankfully, it’s not all death and heartache. The film has its fair share of humor and action sequences. After four Pirates of the Caribbean movies, we know Depp is no stranger to stunts.

Depp recently participated in a Q&A with Yahoo! News, in which he discussed the responsibility of playing a Native American icon. He said, “It was important to give as much back to the Native Americans as possible and to show that they have a fantastic sense of humor.”

He also spoke about balancing a new story with such a classic character. “It was just trying to find a way into the character that was different and not to take anything away from what the great Fran Striker and George W. Trendle [the writers who created the character] did.”

Check out The Lone Ranger trailer below:

The Lone Ranger is directed by Gore Verbinski and hits theaters July 3.

What do you think of the international trailer for The Lone Ranger?