Star Wars fans got a treat Wednesday night when two of the original characters showed up on Jimmy Kimmel Live! And one of them was fully in costume. 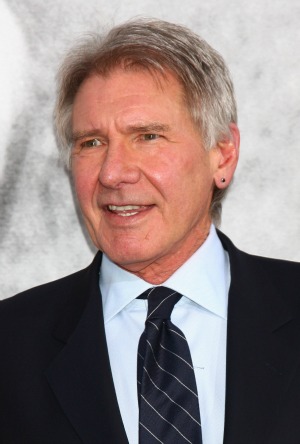 Harrison Ford is out promoting his new film 42, a period piece about baseball player Jackie Robinson. But one question the actor will not answer is anything about the upcoming Star Wars films.

Jimmy Kimmel was the latest to ask Ford about the new films, but it was obviously pre-planned. Kimmel opened questioning up to the audience, but Ford’s refusal to answer any questions about the franchise left many fans — all dressed in Star Wars garb — asking rather boring questions.

“They lamely asked Ford about his love of making movies and his level of hunger,” the Los Angeles Times said.

But then things got really interesting. A figure from Ford’s past stood up to ask a question, and the actor seemed less than amused as Star Wars character Chewbacca suddenly appeared in the audience.

“Ford channeled some barely controlled fury at his onetime co-star, calling him names that are unprintable here and accusing him of improper relations with Ford’s wife,” the Times explained. “This isn’t the first time Ford and Chewbacca have crossed paths on Kimmel’s show, and it appears that long-simmering anger won’t abate anytime soon. (On Kimmel’s show, anyway.)”

“You’re the one who couldn’t keep it in your furry pants,” Ford yelled at Chewbacca on the show, according to cnet.com.

The characters didn’t go much further to explain what happened, but it likely got Star Wars fans around the world excited for the possibilities in the new films.

George Lucas announced back in March that the three original main characters — including Ford — would be returning to the films. But in the same interview he seemed to realize that maybe he spoke too soon.

“Maybe I’m not supposed to say that,” he told Bloomberg Businessweek.

So the question of whether Ford will be appearing in the new films has yet to be answered, and it looks like he will not be the one who eventually answers it.

Only time will tell what the new films will look like. But if the Jimmy Kimmel stunt was any indication, Han Solo and Chewbacca will add a lot of personality to the new stories.