Is Rihanna pregnant? That’s what some fans are wondering after the singer canceled her fourth concert over illness. 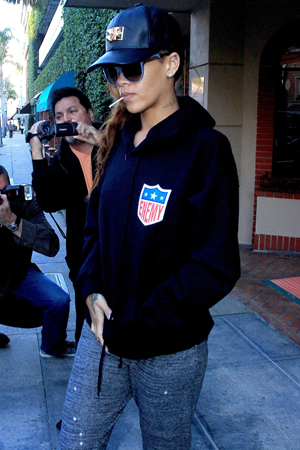 It’s official: Women aren’t allowed to get sick in Hollywood anymore. Why? Because even the common cold turns into a persistent pregnancy rumor.

Just ask Rihanna: The “Stay” singer is allegedly pregnant because she’s canceled several concerts over the past week for vocal problems. Oh, and because she was spotted leaving a Beverly Hills medical center earlier this week with a hand over her stomach in a “maternal” way.

It wouldn’t be impossible for the 25-year-old to be with child, but it’s quite a stretch to go from throat problems to pregnancy — and we’re not the only people who feel that way.

“[Rihanna] is just sick, and that’s really it,” a source told Hollywood Life. “I know, that’s not a good enough reason because everybody wants some drama and the rumors that she’s pregnant to make the rounds, but sorry, not this time. She’s not pregnant!”

RiRi hasn’t addressed the baby belly rumors directly, but she did apologize to fans for missing recent shows.

“I was sick since San Diego!” Rihanna wrote on Instagram. “I kept working cus I thought 2 days off after the Vegas show would be enough time to recover and I f**ked up, those were 2 days off from hell and today is no different!

“I’m sad and disappointed about it!! I had all kinds of plans for Houston!!!”

As for her relationship with Brown? It’s reportedly back on again after a short break earlier this month.

“[Rihanna and Chris] chilled and enjoyed each other [while shopping together on April 10],” a source told Hollywood Life. “Chris came through for [Rihanna] and has been there for her since she got back in town. [Chris] told her he was sorry for being a jerk and he gave her a wrapped bottle of Ace of Spades. He gave it to her and was like ‘sip on this when you’re on tour and need a minute alone. Think of [me] — I love you.'”