Game of Thrones‘ Peter Dinklage says the attention he’s gotten from female fans of the show doesn’t faze him: All the ladies still go for the big guys. 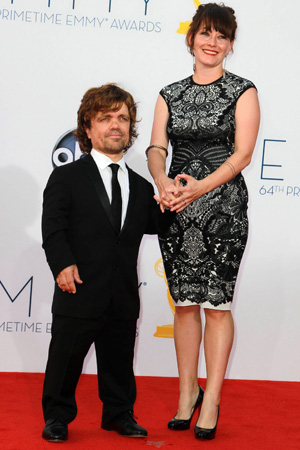 As regal Tyrion Lannister on Game of Thrones, Peter Dinklage is a fan favorite, but he says the lovely ladies don’t really love him.

“They’ll say, ‘Oh, he’s sexy,’ but women still go for the guys who are 6 foot 2,” Dinklage told Playboy. Dinklage is 4 feet 5 inches tall. “It’s nice that people are thinking outside the box but I don’t believe any of it for a minute.”

His head’s not turned, ladies! He is married, by the way. Has a kid. Both wife and kid are super cute. See his wife? Cute, huh?

Dinklage also told Playboy that he’d like to use whatever cachet he does have in building a perfume empire.

They fooled you! Dinklage not leaving Game of Thrones >>

“I have a friend — not a dwarf — who’s an alchemist of sorts,” he said, tongue-in-cheek. “He concocted a men’s cologne.”

When he gave Dinklage a bottle, “I was thinking, we should totally put this on the market. You know how Jessica Simpson and Beyoncé have signature perfumes and make a mint? I’m thinking this cologne could be my ticket to fortune.”

Ticket to the big time!

Dinklage said jokingly that he’d call his scent “Midgeté Midgeté,” because the word “midget” is “like the n-word among short-statured people.”

But like gay people have taken back the word “queer” and black people have embraced the n-word, “some of us have made it our own. We add an ‘e’ with an accent at the end.”

Game of Thrones’ Peter Dinklage signs on for X-Men >>

Ah, Dinklage’s a smart aleck. That doesn’t come as a surprise.

Dinklage’s final revelation was that he’d blown off Brad Pitt and Angelina Jolie at last year’s Golden Globe Awards (the one where she wore that incredible white dress with the red yoke).

“When you’re in that moment and you’re about to accept an award and you have no idea what you’re going to say, you don’t notice that Brad and Angelina are reaching out to say hello,” he said.

Seems to us you’re going to get a lot more practice accepting honors at awards shows, Peter Dinklage.