After a dramatic end to his character’s arc on Downton Abbey, the actor has been seen around New York with a very different look. Is something wrong? 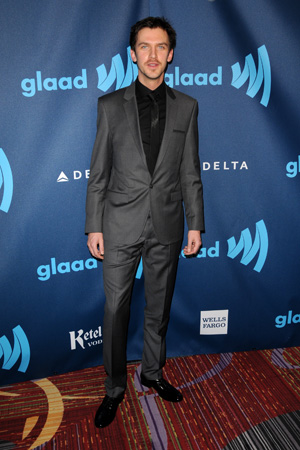 Dan Stevens made the history-minded ladies swoon with his hunky physique and blond locks on Downton Abbey, but that’s all over now.

InStyle.com caught up with Stevens at a NYC party last night and asked: Why so skinny and non-blond now?

“It’s for a role,” Stevens said at the Calvin Klein and Human Rights Campaign supporting Americans for Marriage Equality event. “It’s a bit of a self-made disguise.”

Clad in a sharp, sleek, modern suit, with his hair dyed dark and what looks to be 30 pounds thinner certainly has rendered the former Matthew Crawley almost unrecognizable. His blue eyes do stand out more, though, don’t you think? And you could whittle wood with that jawline.

Stevens told InStyle.com that he was shooting in New York “for the moment.”

The movie? Stevens revealed it was a crime thriller with Liam Neeson called A Walk Among the Tombstones. It’s directed by Scott Frank, who helmed 2002’s Minority Report and upcoming X-Men spin-off The Wolverine.

“It’s a really nice team and we’re having a lot of fun,” Stevens told InStyle.com.

Did Stevens’ lovely ginger jazz-singer wife and two kids, preschool-aged daughter Willow and toddler son Aubrey, accompany him to NYC? He hasn’t been photographed with them, but they could be hiding in some NYC hotel while Daddy goes to parties to promote his movie.

Stevens says his new look keeps Downton Abbey fans from recognizing him on the street. But he says “I’ll always be a Crawley.”