Kourtney Kardashian and Scott Disick have settled into their lives with their two children. But after seven years, why haven’t they gotten married yet? 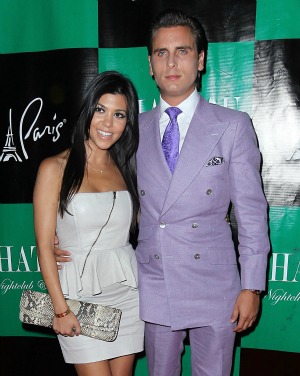 With all the talk around Kim Kardashian’s baby, it’s sometimes easy to forget one Kardashian has a whole family of her own. But that doesn’t mean that family is a traditional one.

Kourtney Kardashian and her boyfriend Scott Disick have been dating for seven years, and have two children together, but they don’t plan to be married any time soon. Disick sat down with Ryan Seacrest recently and talked about their wedding plans, or lack of wedding plans.

“I think if it’s not broke, don’t fix it. You know what I mean?” Disick said, according to Us Weekly.

The couple have two children, Mason 3, and Penelope, who is now eight months. Disick continued to tell Seacrest it wasn’t exactly his choice they haven’t been married yet, at least not in the beginning.

“I would say we’re decently happy,” he said. “I feel like I used to want to get married more than she did, and then, being that she was always so not interested, I’ve decided not to be.”

Kardashian’s sisters have even found Kourtney’s feelings toward her boyfriend a bit weird, but she said it’s only because she is putting her children first.

“You don’t even want alone time with Scott,” Kim Kardashian said to her sister in a recent episode of Keeping Up with the Kardashians. “It’s weird.”

But Kourtney said she sees them as a family now, and wants to make sure they are always together.

“For me, I like doing stuff all together as a family,” Kourtney told her sister.

“He’s gonna cheat on you and it’ll be your fault … You just don’t put in any effort,” Kim responded, according to Us Weekly. “You’re going to lose him. No joke. You’re literally going to end up, like, alone.”

And it looks like Kim’s feelings toward her sister’s relationship were more powerful to Kourtney than it seemed at the time.

“Just hearing Kim say those words really just freaks me out,” she later said. “Not that Scott would ever cheat on me, but I just really don’t want this for my relationship.”