Jennifer Aniston showed off some odd marks on her back at a red carpet event on Wednesday. Had the star been in a car wreck or a fight or something? Nah, she was just practicing alternative medicine. 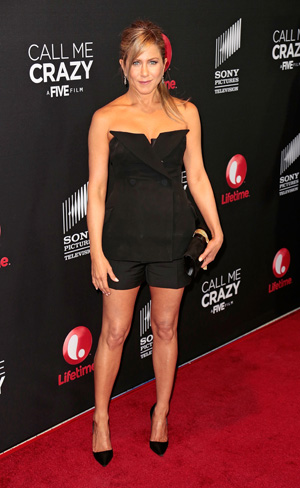 Cupping. That’s what caused the weird circular marks on Jennifer Aniston‘s back that were photographed Wednesday after the star wore a backless outfit and a number of concealer smudges that failed to conceal the marks.

What’s cupping, you ask? It’s a form of alternative medicine practiced by the Chinese. Glass or bamboo cups are heated up, then placed over the skin where they create a vacuum as they cool, sucking at the skin.

Jennifer Aniston is ready to be Mrs. Theroux >>

It’s supposed to increase circulation and help remove toxins. What? Huh? Yes, it sounds goofy to us, too. But a whole bunch of Hollywood stars are into it, including Gwyneth Paltrow, Jessica Simpson, and Victoria Beckham.

Paltrow also told Winfrey, “if you have stagnation, any kind of toxicity in the corresponding organ, it pulls the stagnation and the toxicity out through that point.”

The downside of cupping, aside from sounding nutty and costing money, is that it leaves red circles on one’s back for up to 10 days, Handbag.com reports.

So why did Aniston choose a strapless, low-backed outfit and a ponytail for Wednesday’s event, leaving the marks exposed on her back? She clearly tried to cover them up with concealer. Why not cover them up with, I dunno, clothing? Or hair?

When she was photographed with the marks, Aniston was attending the premiere of Call Me Crazy, the Lifetime series of film shorts that Aniston helped produce.

She said that producing the films about mental illness gave her inspiration: “These are the things that fulfill you, these are the things that you wake up and are excited about — not that you don’t feel that way about other things, but this feels like I’m making a contribution in a greater way. It’s a different feeling and I feel lucky that I can do this.”