Malin Akerman is officially a member of the new mommies club after she gave birth to her first baby on Tuesday. She joyously announced the news on Twitter. 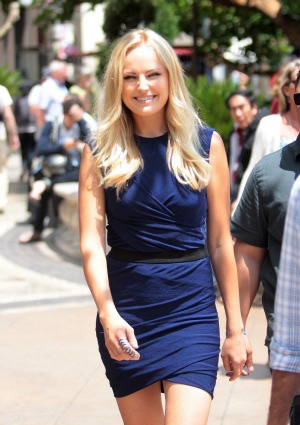 Malin Akerman is officially a mom after she gave birth to her first child on Tuesday. People was the first to report the news that son Sebastian Zincone was born to the actress and her husband Roberto Zincone.

The Rock of Ages star announced the big news via Twitter.

She wrote, “My husband and I welcomed our beautiful, healthy baby boy to this world this morning! Biggest joy of my life!!! #lovemykid”

The follow-up tweet shared even more joy with her followers.

She said,“PS and his name is … Sebastian Zincone. Love him more than life itself!! #whatafeeling !!!”

Akerman delivered the news about her first child back in September. Her husband of six years is a musician. The two met while performing in the now-defunct band The Petalstones.

The actress talked to Women’s Health in March 2009 about her desire to have kids.

She said, “I’ve always wanted a big table of kids. But we’ll probably end up having two of our own and adopting one.”

The 34-year-old won’t have much time to rest, though. With baby Sebastian at home, she also has a whole slate of TV and film projects on deck for 2013. She already shot the ABC pilot of Trophy Wife with Bradley Whitford. The show will know in May whether it is picked up for the 2013-14 television season.

In addition to the sitcom, Akerman is in pre-production for Inferno: A Linda Lovelace Story, Hemlock Drive, and I Fought the Law.

There’s no word on when the new mommy is planning on sleeping with a schedule like that.